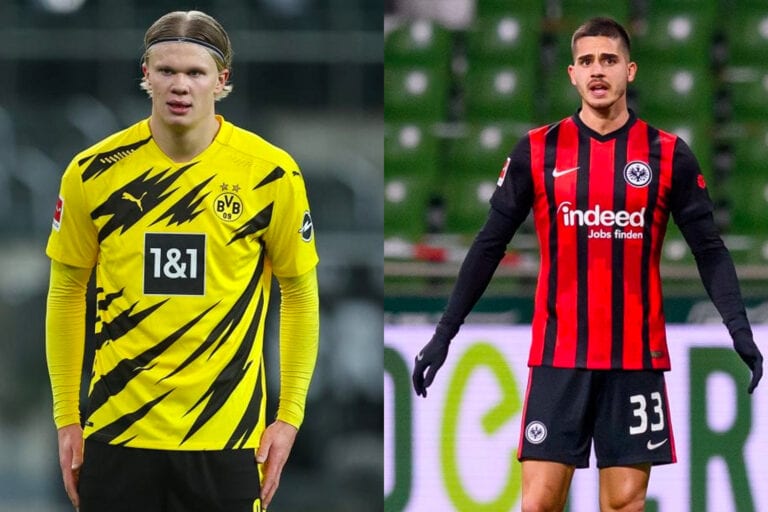 The end of the 2020/21 season will signal the end of an era at Manchester City, as Sergio Aguero leaves the club at the conclusion of his contract.

Aguero will go down as one of the club’s all-time greatest players, having become City’s record scorer during his time at the Etihad.

City manager Pep Guardiola paid tribute to the Argentinian on Tuesday, calling him “the best striker this club has ever had for this century through the years”.

The club now must look towards signing a successor for the striker for next season.

They have already been linked to a number of big names, including Borussia Dortmund’s Erling Haaland.

The future of Erling Haaland has been the hot topic when it comes to football transfers this season.

Haaland has a reported release clause of £63 million in his Dortmund contract activated in 2022. However, that hasn’t stopped teams being linked with him for this summer.

One potential issue for City in terms of signing Haaland would be the identity of his agent.

Mino Raiola and Guardiola have had run-ins the past, dating back to when Raiola’s client Zlatan Ibrahimovic was at Barcelona during the Spaniard’s tenure.

But the signing of Haaland would certainly send out a huge statement.

The striker became the fastest ever player to reach 20 Champions League goals this March, and continues to go from strength to strength.

Rumours over Harry Kane‘s future seem to swirl around every summer, although he still remains at the club he joined as an 11-year-old.

Is that about to finally change?

Spurs are still in the race for Champions League qualification, currently sitting only three points behind fourth-placed Chelsea in the Premier League.

On a personal level, Kane is having a successful season. He has recorded 21 league goals and 13 assists.

However, he said last week that he would decide on his future after this summer’s European Championships.

Should he decide to leave Spurs, City would surely be one of the clubs keeping a keen eye on proceedings.

Andre Silva has hugely impressed since joining Frankfurt in the summer of 2019.

It has been somewhat of a breakthrough 18 months for the 25-year-old, who struggled for goalscoring form at previous club AC Milan.

This season, the Portuguese striker has 24 goals in 28 Bundesliga appearances. That tally is only bettered by Bayern’s Robert Lewandowski.

If City want to sign Silva, however, they may face stern competition from Barcelona and rivals Manchester United, who are reportedly interested in the forward.

It has been reported on numerous occasions that City are interested in signing Danny Ings as Aguero’s successor this summer.

The England international’s contract expires at Southampton in 2022.

He has scored 37 Premier League goals since joining the Saints from Liverpool in 2018. 22 of those strikes arrived last season.

Ings has found the finest form of his career at Southampton, and could be a viable transfer option for City this summer that likely wouldn’t break the bank in the same way as the previous options.

City have a number of promising academy prospects that could make the step up to the first team.

One of those is 18-year-old starlet Liam Delap, who has coveted reported interest from Real Madrid.

Should City convince the forward to stay, they could fast-track him into the first team.

Delap made his Premier League debut in September and has featured in both domestic cup competitions for Guardiola’s side in the current campaign.

Gabriel Jesus, meanwhile, could play an even more important role next season, having scored eight goals in 24 league appearances for City this season.