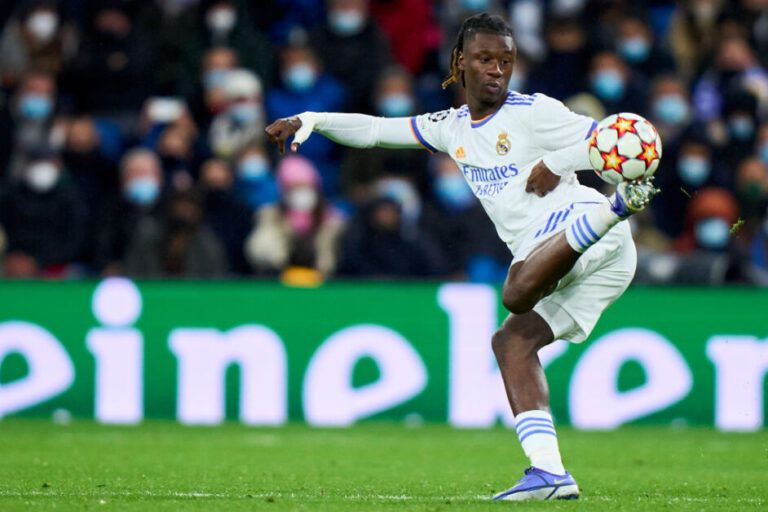 The best is always expected from Real Madrid youngsters.

For years, Los Blancos’ youth academy has been a bountiful source of great players for European football. From Achraf Hakimi to Fabinho, former Madrid prospects fill the ranks of top-flight Champions League teams.

We all know about Vinicius Junior or Rodrygo Goes, who are already staples of Carlo Ancelotti’s starting teams this season. But Real Madrid’s youth army does not end there, so let’s take a deeper look.

You may think the future doesn’t look promising for Miguel Gutiérrez, a 20-year-old left-back who’s been in Madrid’s academy since 2011.

Real Madrid are overstaffed at the left-back position.

If first-choice Ferland Mendy is hurt, they can swiftly replace him with club legend Marcelo or this other guy they signed last summer, David Alaba. Handyman Nacho Fernández has done the odd shift at left-back as well.

And yet Gutiérrez has managed to play more than 600 minutes with the first team so far. At the end of last season, he first cracked the rotation, stealing Marcelo’s starting spot after Mendy’s tibia injury. Gutiérrez’s pace and creativity with the ball helped Madrid to cling on in the title race until the very end.

He has suited up for the first team four times this season and has already made his Champions League debut. Gutiérrez has the makings of a great left-back. His defensive consistency is not quite there yet, but there’s nothing to suggest that it won’t come with time.

Madrid shocked the world by signing Eduardo Camavinga on the last day of last summer’s transfer window. The French midfielder had been linked to PSG and Man United but decided to join Real in the end. It was a brave decision, given that Madrid’s starting midfield trio has not changed since 2014.

To be fair, Camavinga regularly featured in Ancelotti’s team at the beginning of the season. His first weeks as a Madridista were spotless. Camavinga scored in his debut against Celta, was a key reserve in a last-minute win against Valencia, and started in a 6-1 home win against Mallorca.

However, he has sunk into the deeper parts of the bench in recent weeks. It’s telling that Ancelotti didn’t employ him at all in key games against Barcelona or Atlético.

Camavinga is still a bit raw for someone who’s played professionally since age 16. He is somewhat nervous with the ball and hasn’t reached peak physical form yet.

And yet, Madrid will need him soon. Luka Modric is 36, and Toni Kroos will turn 32 in two weeks. Both midfield maestros have been racking up too many minutes for players their age. Real Madrid youngsters need to step up and provide fresh legs and pace in midfield after the Christmas break. That includes Camavinga.

Reinier is probably the least well-known among the group of Real Madrid youngsters hailing from Brazil. An attacking midfielder off the Flamengo academy, he had to wait until turning 18 to join Los Blancos.

Reinier signed for a €30m fee that still casts a shadow over his performances. He moved to Borussia Dortmund on a two-year loan in the last weeks of the summer 2020 transfer window.

Reinier’s spell at Germany hasn’t been impressive. He played a total of 19 games last season and mostly came off the bench. This season it’s been the same story despite Marco Rose taking the reins at Dortmund. Reinier has played a total of 275 minutes across 11 games and has not managed to score or assist yet.

But don’t be fooled by his lack of playing time at Dortmund. Reinier is a talented and savvy midfielder whose style is reminiscent of Kaka.

Last summer, he made Brazil’s Olympic squad and was a fundamental part of their semi-finals win against Mexico by making a big impact off the bench.

It has been rumoured that Madrid might be ready to end his German adventure this January and loan him elsewhere. It’s fair to assume there will be plenty of suitors.

Yet another attacking midfielder among Real Madrid youngsters, Takefusa Kubo is enjoying a successful second spell at Mallorca. The Japanese attacker is arguably Madrid’s most special young player this side of Vinicius Junior. His career has been quite a rollercoaster so far.

Kubo spent 2011 to 2015 in Barcelona’s academy. However, he had to return to Tokyo after the Azulgranas were found to have violated FIFA’s transfer policy for international under-18’s players.

Kubo’s playing style has been compared to none other than Leo Messi’s. He is a small-yet-sturdy attacker who keeps the ball impossibly close to his feet. His high IQ and last-pass accuracy make him a perfect fit for the number 10 position.

Moreover, his quickness and dribbling skills grant him uncanny potential as a winger too. Mallorca’s training staff seem to agree, as they have given him the starting job in the right wing.

After a successful 2019/2020 campaign with Mallorca, Kubo had a rough 2020/2021 season. His loan move at Villarreal was cut short in January by Real, who weren’t happy with his playing time. He did get on the pitch more for Getafe, but their defence-oriented style was too awkward a fit for him to truly shine.

Kubo was loaned to Mallorca for a second time, and not even a potentially serious knee injury has stopped him. In only his second game after his return from injury, he completed a remarkable off-the-bench performance against Atlético by scoring a dramatic goal in a 1-2 upset.

Kubo will be the man to watch for Mallorca as they look to escape relegation and climb up to European spots.

Ramón has not made his first-team debut yet, but he is a regular at Ancelotti’s training sessions. He was also a favourite of Zinedine Zidane’s during his last season as Real’s manager.

Madrid are thin at centre-back following the departures of Ramos and Varane. After Militao and Alaba, Nacho is their only reliable reserve at the position. Ramón’s competitor for the fourth centre-back position is Jesús Vallejo, an injury-prone prospect who has only played ten minutes so far.

The only defensive-minded player among this list of Real Madrid youngsters, Ramón is not an academy prospect as such. He was signed from Mallorca back in 2018 and has only been in Madrid for two seasons.

But it hasn’t taken him long to become one of the key players for Real Madrid Castilla, who play in the third tier of Spain.

Managed by club legend Raúl, Castilla aspire to reach promotion stages and play in La Liga’s second tier next season. It’ll be hard to do if his key defender Ramón gets called up to the first team.