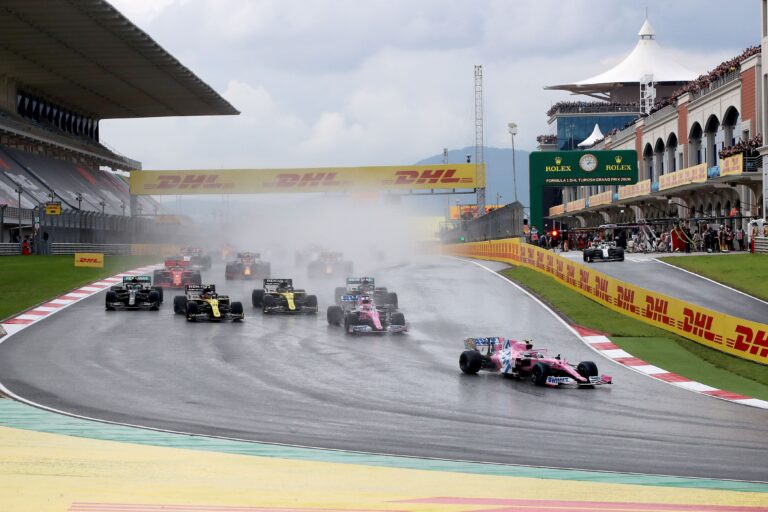 Formula 1 returns after a two-week break this weekend with the running of the Turkish Grand Prix at Istanbul Park.

It is the second time that the track has been used for F1 since it was reintroduced to the calendar in 2020.

Prior that, it served a five-year stint on the calendar between 2006 and 2011, producing some exciting Grands Prix.

None, however, were perhaps as entertaining as last year’s running. In a race that saw plenty of rain fall, Lewis Hamilton judged the conditions perfectly in running on worn intermediate tyres to the end of the race, securing the win and, in the process, winning his seventh F1 world championship.

Here’s five reasons why this year’s Grand Prix could be equally as intriguing:

Lewis Hamilton will take a 10-place grid penalty as a result of changing his internal combustion engine (ICE) prior to the race weekend getting underway.

With qualifying not completed at the time of writing, the Mercedes driver could start as high as 11th on Sunday’s grid.

Hamilton currently leads Max Verstappen by two points in the world championship standings, and the speed in which he can progress through the field will determine whether or not that lead is cut into or, indeed, increased by the end of the Grand Prix.

There aren’t too many more eye-catching corners on the F1 calendar than Istanbul Park’s turn eight.

A quadruple left-handed apex, it is also only one of the most challenging. Add the fact that it is taken full throttle into the equation, and the corner is one of the most thrilling to witness.

The fact that it is full throttle perhaps takes away part of the challenge compared to driving it in older F1 cars, but the build up of speed generated could create some huge overtaking opportunities on the two main straights.

Can Norris bounce back?

There was heartbreak for Lando Norris and McLaren as the British driver lost a potential race win in the closing laps in the Russian Grand Prix last time out.

Norris led for much of the race, and looked to be holding off Lewis Hamilton as the chequered flag approached.

However, on lap 47 of 53, the rain began to fall. Mercedes and Hamilton elected to pit for intermediate tyres, while McLaren and Norris chose to stay out. The former proved to be the correct decision, with Norris ultimately slipping down to seventh, unable to keep his car on the wet track on dry tyres until he pitted.

Regardless of the end result, it was still a superb drive from the 21-year-old. Can he bounce back from the disappointment of Sochi and record a higher position in this week’s race?

Hamilton’s win in Sochi – and team-mate Valtteri Bottas’s rapid jump up to the field from 15th to fifth in the closing laps – meant Mercedes extended their gap to Red Bull even further in the Constructors’ Championship.

The Silver Arrows currently lead Red Bull by 33 points at the top of the standings. With Hamilton’s engine penalty, it seems likely that at least two of the four drivers from the teams will be battling it out on track on Sunday. Who can get the upper hand?

There is no rain forecast for the race this year, and qualifying has yet to be completed at the time of writing – but there is rain forecast on Saturday morning in Istanbul.