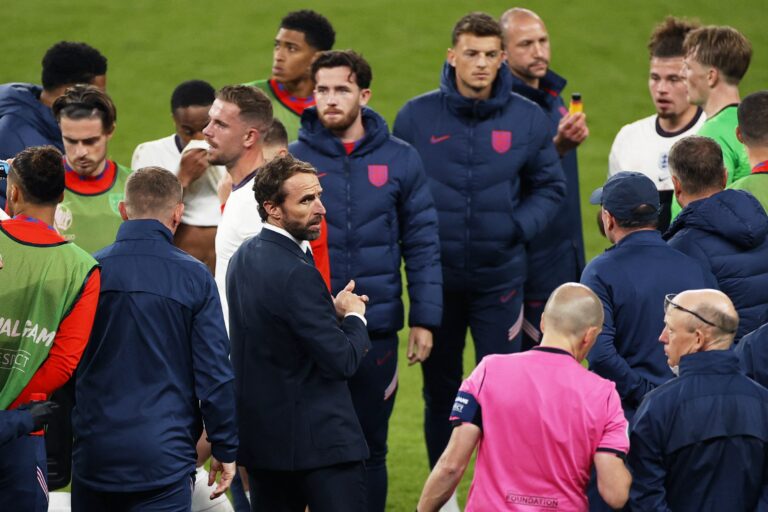 Footage has been revealed of Gareth Southgate informing England players of the order they would take spot kicks in the final against Italy.

The game finished 1-1 after extra-time, meaning penalties were needed to decide a European Championship winner for the first time since 1976.

Jorginho and Andrea Belotti had seen their penalties saved by Jordan Pickford.

Now, footage has shown Southgate naming the order of the England penalty takers, going up to each player individually to inform them.

On the clip, the England manager can be seen telling Sancho that he will be taking the fourth penalty, before going over to third taker Rashford.

He then walks over to Saka, who took England’s fifth penalty on the night. Saka can be seen nodding his head as Southgate speaks, and replies ‘Yes’.

The footage also shows that Jordan Pickford and Kalvin Phillips were lined up to take England’s sixth and seventh penalties.

Southgate explained after the match that the order of penalty takers was his decision.

He told ITV Sport: “I told the players that nobody is on their own in that situation.

“We decided to make the changes [Sancho & Rashford on] right at the end of the game, and we win and lose together as a team.

“They’ve given everything. The players have been tight throughout and that’s how it has to stay.

“That’s my decision to give [Saka] that penalty. That’s totally my responsibility. It’s not him, or Marcus, or Jadon.

“We worked together, we worked through them in training and that was the order that we came to.

“What they have to know is none of them are on their own. We win and lose as a team.

“Penalties are my call. We worked in training.”