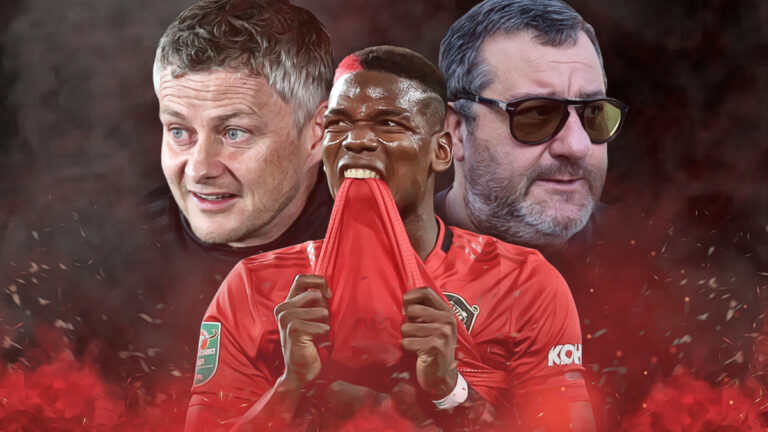 No player in the United ranks splits fans quite like Paul Pogba does.

On one hand, there’s no denying the talent the French midfielder possesses. Pogba was integral to France’s World Cup victory and could feel a little unfortunate not to receive the Golden Ball award for his efforts.

On the other, the player’s representation is unfortunate to say the least. Between the regular outbursts from Mino Raiola and his brother, tabloids have a new quote delivered on a weekly basis, each more infuriating than the last.

Sir Alex Ferguson openly spoke of his disdain towards the agent and Solksjaer is now finding out just why that was.

Pogba’s return to the club was always going to be a complicated one, given the terms on which he departed in 2012, when Ferguson labelled him disrespectful – a tough tag to shrug off coming from someone United fans hold in higher regard than their own family.

Still though, in a bleak time for the club, his signing was meant to be a sign of better things to come. Any hard feelings were put to one side and one of the most sought-after talents in world football was returning home.

Now in the third year of that hallowed comeback and things are quickly turning sour.

During that spell Pogba has shown flashes of the quality we all know is there. In terms of sheer talent, few players at the club come close – but one brilliant individual was never going to be enough to pull United out of this rut and the word scapegoat springs to mind.

If Paul was sold the dream of a much-needed rebuild at the club when he joined, he and all United fans, have been let down. To give some perspective, it’s taken until this season to find a replacement for Gary Neville, who retired in 2011.

That seemingly non-existent transfer strategy has essentially left Pogba on more than one occasion, asked to play the role of three midfielders – A deep-lying playmaker, a box-to-box-midfielder and a number 10.

Combine this with a team that possesses no real identity and questionable levels of quality and it’s a little easier to understand why frustrations from both player and fans may arise. Throw in a long list of “he-said-she-said” quotes from “unnamed sources” and it seems like things were destined to go this way from the start.

Much of that fan frustration hasn’t actually stemmed from the player himself, rather the controversial ‘super-agent’ Mino Raiola, a man who’s methods haven’t exactly made him the most popular man in football.

As always, it’s impossible to know what’s going on behind the scenes and now more than ever, it’s important to not buy into inflammatory headlines. Admittedly that’s tough when the agent of a player clearly unsettled is parading terms like “prisoner” on social media for all to see.

Paul is not mine and for sure not Solskjaer’s property, Paul is Paul Pogba’s. pic.twitter.com/CvBHW8mj8U

Up until the past few weeks, Solksjaer appeared much more upbeat about Pogba’s United future. His latest comments make for a much more cryptic outlook though and no one seems to know when or where the player will return.

Perhaps aided by the arrival of Bruno Fernandes, the manager cuts a figure of someone who is simply bored of offering updates on a situation seemingly out of his control.

The Portuguese international has already injected much-needed creativity into the midfield, Fred miraculously looks like a new player and McTominay’s solidity has been a breath of fresh air. Despite Pogba’s undeniable ability, cashing in and using that money on Jack Grealish or James Maddison doesn’t seem like the daunting decision it was six months ago.

While it’d be nice to think things aren’t past breaking point, that may be slightly naive given the circumstances. Paul Pogba is going to improve any team in the world and now in the peek of his career, a desire for Champions League football and world class teammates is a fair one. The bigger issue here, are the methods employed by agents to force through such a move.