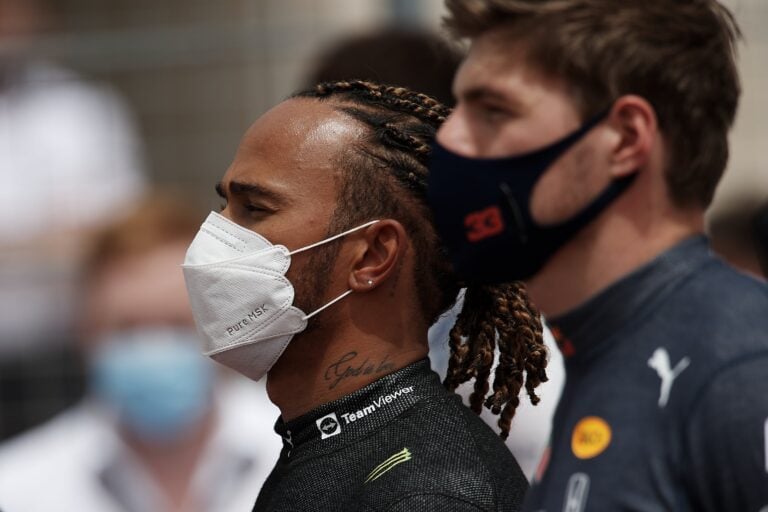 The 36-year-old overtook Lando Norris in the closing laps of the race after electing to pit for intermediate tyres.

Verstappen, who also pitted for intermediates, jumped from the latter reaches of the points to second place. The Dutchman, however, ended up losing his championship lead, and now sits two points behind Hamilton.

With seven races to go in the 2021 season, F1 fans are gearing up for a thrilling conclusion to the title fight.

Villeneuve – who went into the final race of the 1997 season in a title battle with Michael Schumacher – believes that, out of the pair, Verstappen has been the “superior” driver this year.

He told Corriere Della Sera: “Verstappen is superior, he didn’t make any mistakes. He always went on the attack.

“Instead, Lewis showed weaknesses. And Mercedes, too, more than Red Bull. After [Nico] Rosberg, he [Hamilton] had an easy life. Maybe he had fallen asleep a bit; this year, he woke up with a bang. But it remains a phenomenon.”

Villeneuve also gave his opinion on the Turn 2 incident between Hamilton and Verstappen in the Italian Grand Prix at Monza which caused both cars to retire.

The FIA stewards ruled that Verstappen was “predominantly to blame” and handed him a three-place grid penalty for the Russian Grand Prix.

Villeneuve said: “Max was aggressive: he could cut the chicane but then he would have to give up the position.

“Lewis could have left 10cm more but wanted to stay ahead. It seemed to me to be a process of intentions. You can’t punish someone by think they did it on purpose when contact starts meters before the maneuver becomes intentional.”

He later added, in response to a separate question: “There were no such penalties [when I was racing in F1]. But it was different, we overcame inside.

“Now they block you on the straight, they move, you are forced to take extreme risks to pass and you can make mistakes. So it is difficult to establish the responsibilities, in Monza they were not clear.”

Formula 1 returns this weekend with the staging of the Turkish Grand Prix at Istanbul Park.