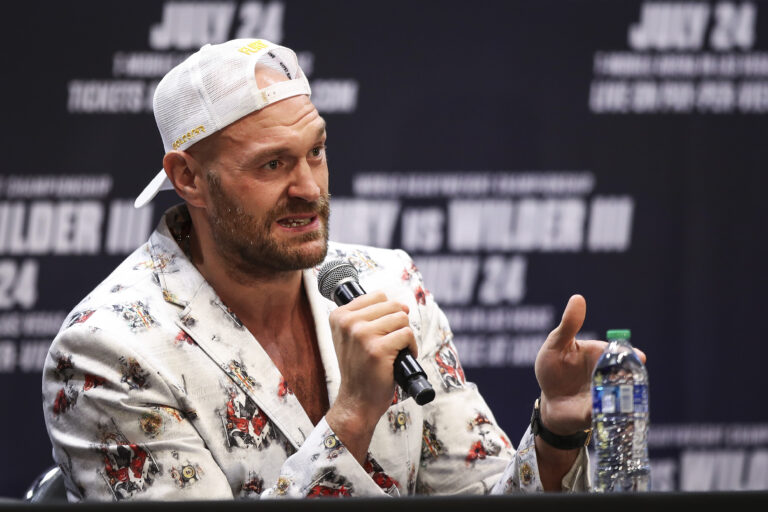 Tyson Fury has described Deontay Wilder as an “atomic bomb” and the “most dangerous heavyweight out there” as the pair prepare for their trilogy fight on Saturday.

Fury produced a superb display to defeat Wilder back in February 2020 via knockout, in what was the last time either man has stepped inside a boxing ring.

In doing so, the 33-year-old won the WBC and The Ring titles from his American opponent, as well as handing the ‘Bronze Bomber’ his first professional loss.

The first bout between the two in December 2018 ended in a draw.

In May, Fury was ordered to fight against Wilder again. A US judge ruled in mediation that the ‘Bronze Bomber’ had the right to face him for a third time.

Speaking at a BT Sport Box Office pre-fight event ahead of the trilogy bout, Fury called Wilder “very dangerous” and an “atomic bomb”.

He said: “Make no mistake about this, Deontay Wilder is the most dangerous heavyweight out there. Combine them all together and they don’t make a danger like Wilder.

“So that’s what I’m messing with. I’m playing with an atomic bomb, messing round, clipping wires. Every time you go into the ring with Deontay Wilder you’re playing with that danger.

“This is the third time now I’ve been in the ring with him and every single time he’s been very dangerous. He’s a very dangerous hombre with big, big power and he can close the distance quickly.”

Fury also said that Wilder was the second most dangerous fighter he has ever boxed against, behind Wladimir Klitschko.

The ‘Gypsy King’ defeated Klitschko in Germany back in 2015 to become world heavyweight champion for the first time. Prior to the defeat, the Ukrainian had not lost a professional fight for over 11 years.

“Klitschko was my most dangerous hurdle to overcome,” Fury stated.

“Once I got that guy out of the way I always knew Wilder would be my most dangerous opponent no matter who I fought.

“Klitschko would be the first danger, no one compared to him. And the second danger would be Wilder in my second career.

“That’s what we’re messing with – my ultimate danger man. If you could design any fighter to be able to compete with me as a boxer then it would be Deontay Wilder. He’s the most dangerous out of all of them.”

Fury v Wilder III takes place at the T-Mobile Arena in Paradise, Nevada on Saturday, October 9. It will be the second consecutive time that the pair have faced off in the city of Las Vegas.