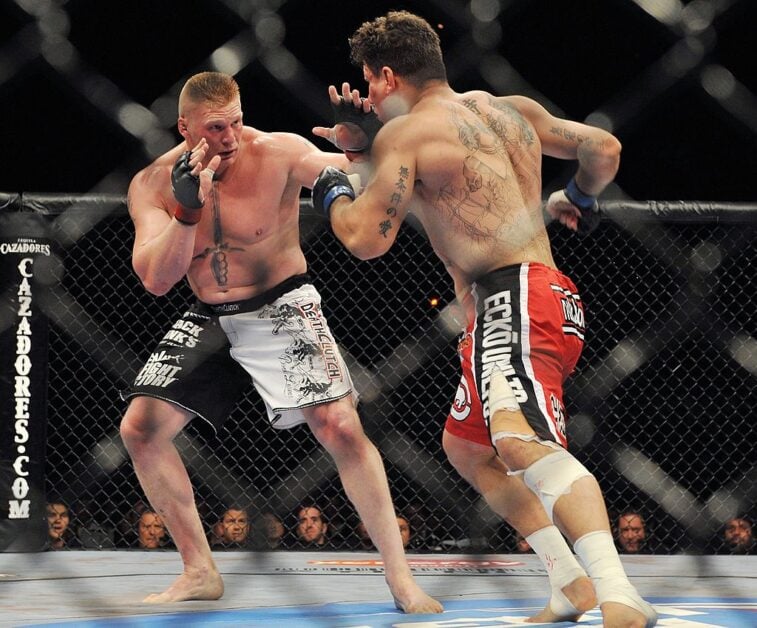 One only needs to look at the beef between Brock Lesnar and Frank Mir to realise that trash-talking is an essential part of the fighting business.

There’s only one thing that fighters love more than throwing punches: Talking s**t. From Mohammed Ali’s intense rivalry with George Foreman to the camp theatrics of the WWE, the history of combat sports is brimming with insults and threats.

Promoters love it too. There’s nothing like a good old beef to help sell a fight.

But it doesn’t always work. Sometimes fighters can go out of their way to manufacture drama – and if the stakes are low, the public won’t buy it.

Other times, fighters genuinely hate every bone in their opponent’s body. That was the case with Frank Mir and Brock Lesnar, whose rivalry still stands as one of the most violent in UFC history.

Frank Mir vs Brock Lesnar: How did it all start?

It all started in 2008. Lesnar, then a WWE star, made his UFC debut against Mir. The bout started with Lesnar’s brute force proving too much for Mir, who was almost KO’d.

However, Mir made his experience count. Lesnar got distracted for half a second – enough for Mir to catch him with a kneebar and cause him to tap out.

Lesnar’s pride took a big hit. Not only had he lost his first UFC fight, but he had done it with an amateur mistake after his promising start.

One year later, The Beast Incarnate took his revenge. He finished Mir with a gust of heavy punches at UFC 100 and successfully defended his UFC heavyweight title.

Talk of a second rematch bounced around the rumour mill, but it never happened.

Since then, Frank Mir hasn’t let go of his grudge against Lesnar. His extreme hatred led to him wishing death upon Lesnar in what is arguably the most violent interview in UFC history.

Speaking to Mark Madden on WXDX radio in 2010, Mir ensured that no one questioned the credibility of his beef with Lesnar.

Frank Mir: “I hate who he is as a person”

Mir didn’t hold back, saying: “I’d rather go ahead and say what’s on my mind than to sit there and come up with some PC, ‘Oh, the guy is a great fighter, and I have a lot of respect for him.’ If I don’t mean it, why is it even coming out of my mouth?

“I hate who he is as a person. I want to break his neck in the ring, and I want him to be the first person that dies due to Octagon-related injuries.”

Mir’s hatred went beyond the octagon. More than anything, he hated Lesnar’s angry-and-loud persona. The thought of children growing up wanting to be like Lesnar made Mir cringe:

“Man, I lost to this guy the second time around, and now people think that’s the way to be — be big, obnoxious and angry. That’s not right.

“We have anger toward each other. Everything I stand for he despises and dislikes, and I can tell you I truly do not like him as a person whatsoever.”

After Dana White called Mir out for his comments, the fighter issued an apology.

“I would like to apologise to Brock Lesnar, his family, the UFC and the UFC fans for my stupid remarks. I respect Brock, all the other fighters, and the sport of mixed martial arts. I’m sorry that I stepped out of line.”

However, Mir would insist that he had done nothing wrong only a few days after the initial statement.

“I was like, you’re kidding, right? This is a joke, right? I’ve heard people say that this is to the death. I heard Brock say he was going to put his hand up my rear end to pull out a horseshoe. I didn’t hear anyone get too upset about that.”

Did Lesnar and Mir sort things out?

That same year, Mir tried to take out his anger on Shane Carwin, whom he called “a better Lesnar.”

The Nevada native spent more than half a year getting strong and big enough to fight Carwin, whose huge physique gave him a clear advantage over Mir.

Far from completing the upset, Mir lost the fight via knockout in the first round.

After testing positive for turinabol metabolites in 2016, Mir was released from the UFC despite having six fights left on his contract.