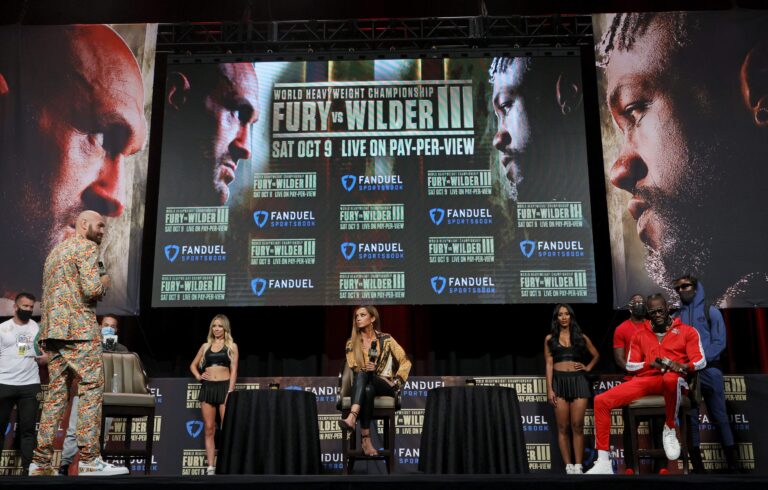 Tyson Fury and Deontay Wilder were denied the traditional face-off after a heated press conference prior to their trilogy fight on Saturday.

Fury will put his heavyweight titles on the line against Wilder in Las Vegas on Saturday evening.

The bout will be his first defence of the titles since he defeated the ‘Bronze Bomber’ via technical knockout in February 2020.

Many of the headlines from the pre-fight press conference have focused on Wilder doubling down on allegations of cheating he made towards Fury after their last fight.

Last month, he labelled the ‘Gypsy King’ as “one of the biggest cheats in boxing“.

At the press conference (quotes via talkSPORT), Fury hit back by saying: “I don’t care because it is obviously coming from an unwell person.”

“He accused me of everything, his team, trainer, suit [worn to the ring], injuries, the Athletic State Commission of Nevada, the ref. If he had come out with one excuse it might have been believable.”

“What it tells me is he is a weak person who I am going to knock spark out on Saturday night.”

As the press conference drew to a conclusion, presenter Kate Abdo invited both fighters to approach each other to conduct the usual face off. However, promoters Frank Warren and Bob Arum quickly stopped it in its tracks. Arum told reporters later that he had said there was to be no face off.

Fury later claimed he would have headbutted Wilder if the pair were allowed to face off.

He told IFL TV: “Why? Frank Warren must have thought I was going to chin him. I wouldn’t have chinned him, I’d have just nutted the c***. Like that!”

The trilogy fight between Tyson Fury and Deontay Wilder will be shown exclusively on BT Sport Box Office in the UK and Ireland.

The walk-ons are likely to commence at around 4am UK time on Sunday.

Three heavyweight contests have been confirmed on the undercard. They include Frank Sanchez’s WBC Continental Americas and WBO-NABO heavyweight title defences against Efe Ajagba.