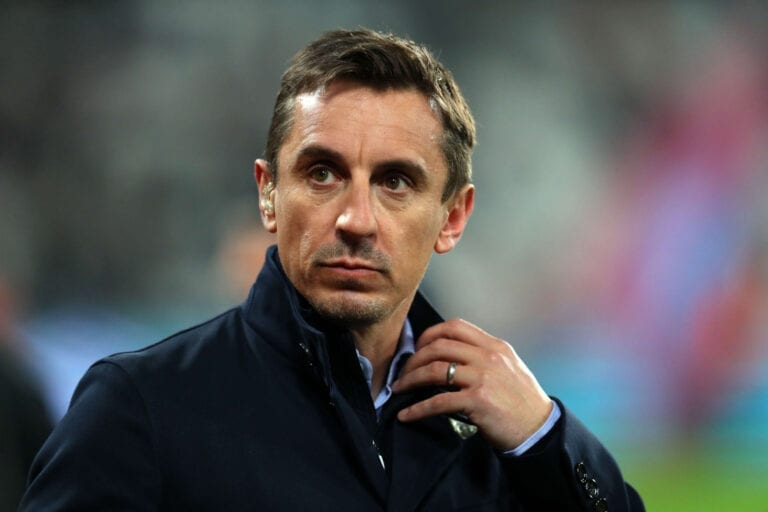 Gary Neville has launched a new campaign which aims to change regulation in English football.

Neville has called for an independent regulator on multiple occasions, including after the Super League was first announced.

He announced the new campaign this morning on Twitter, alongside an open letter, petition and video.

The letter was signed by the likes of Gary Lineker, Jamie Carragher, Rio Ferdinand and fans’ groups from five of the clubs involved in the Super League, West Ham United and Newcastle United.

It says it hopes the fan-led Government review will lead to change on “important concerns; including co-ordinated strategies to deal with racism, supporters’ representation within clubs, LGBTQ issues, ticket costs and the distribution of income”.

The petition – which has already racked over 71,000 signatures at the time of writing – reads: “The Government should use the recently established fan led review of football to introduce an Independent Football Regulator in England to put fans back at the heart of our national game.

At 100,000 signatures, a petition is considered for debate in parliament.

The government responds to all petitions that reach 10,000 signatures – a number that was smashed within an hour.

In the video he posted to Twitter, Neville said: “It’s been a turbulent few weeks for English football.

“A European Super League proposal that was launched by the top six clubs that was brought down by a wave of opinion against it. It was universally hated by everybody.

“That has led to protests at many of the top clubs up and down the country, whether it be on Manchester United’s forecourt or whether it be at Tottenham over the weekend.

“Chelsea, where Petr Cech had to go out and calm the fans down, and Arsenal, against their ownership.

“There is one big opportunity now in these next few months to influence the outcome of English football and create a fairer game for all.

“A fan-led review has been announced by the government that is being led by Tracey Crouch, and I urge you, if you hated me as a player, if you dislike me as a pundit, just to listen to me this one time and sign this petition which will bring an independent regulation and transparency at the top of the game we all love.”