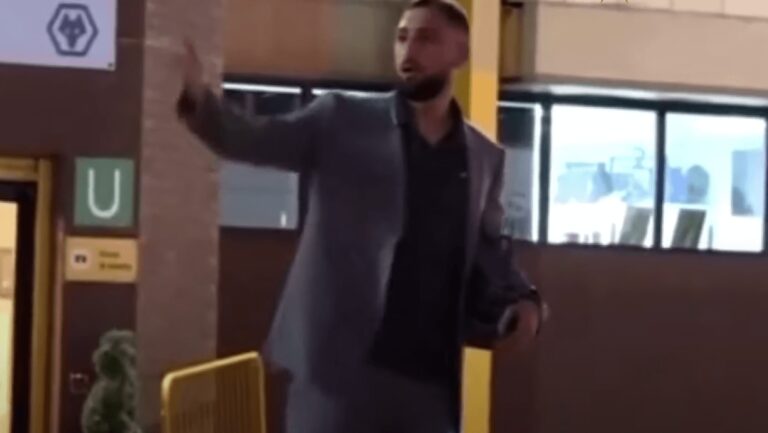 Italy goalkeeper Gianluigi Donnarumma ended up confronting a fan who was insulting him following his nation’s match against England.

The PSG shot-stopper kept a clean sheet for the Azzurri as they drew 0-0 in a drab Nations League encounter. Despite England having the lions’ share of possession, they could not beat Donnarumma, and only forced four shots on target.

England remain rooted at the bottom of their group, and continue their winless streak as a result of the draw. In contrast, Italy stay top of the Nations League group A3.

It was definitely a more positive result for the Azzurri – especially for their goalkeeper. Donnarumma will be happy to have an easier time of things after a mixed 2021/22 season.

The Italian shared goalkeeping duties at Paris Saint-Germain with Keylor Navas. Because of this, consistent runs in the side were hard to come by. During the 2021/22 season, Donnarumma made 23 appearances in all competitions, keeping nine clean sheets.

By comparison, Navas played 26 matches and finished with 10 clean sheets. However, Donnarumma’s season was punctuated by some high-profile mistakes. For instance, in the Champions League round of 16 loss to Real Madrid, the Italian gifted Los Blancos a goal.

Real forward Karim Benzema harried Donnarumma – forcing an inexplicable error from the PSG man. From Benzema’s work, the keeper played the ball directly to Vinicius Jr, who set up Benzema for an easy goal.

Mistakes such as the Champions League blunder, and the shared playing time, mean that Donnarumma has had a tricky first season in the French capital.

He joined Les Parisiens on a free transfer last summer from AC Milan. Unfortunately, the move left a bad taste in Milan fans’ mouths – and Donnarumma still feels the wrath of the Rossoneri faithful on occasion.

Reports from Italian outlet Corriere della Sera claim that Gianluigi Donnarumma got in a spat with a fan.

Following the 0-0 draw with England at Molineux, the newspaper says that Donnarumma was heading for the team bus when a Milan fan started shouting insults at the keeper. However, the fan kept himself hidden amongst others who wanted autographs and pictures with the players, making him difficult to spot.

After the supporter hurled repeated abuse in his direction, Donnarumma turned back towards the crowd to confront the angry person. The pair had a heated exchange that lasted a matter of moments – convincing the fan to halt his abuse.

Following this, a stony-faced Gianluigi Donnarumma started to go back towards the team bus, signing autographs for the waiting crowd.

Although what the fan exactly said is unknown, it was clearly enough to provoke a reaction from the Azzurri shot-stopper. Upon reaching the bus, a member of the Italian backroom staff hugged Donnarumma. According to Get Football News Italy, the keeper dismissed the incident as ‘nonsense’.

Sadly, this is not the first time that Donnarumma has felt the anger of Milan fans. In the Nations League semi-final between Italy and Spain last year, fans booed Donnarumma.

Despite the October 2021 game being held in Italy, the crowd at the San Siro still felt that their team’s keeper deserved some hate for his club endeavours.