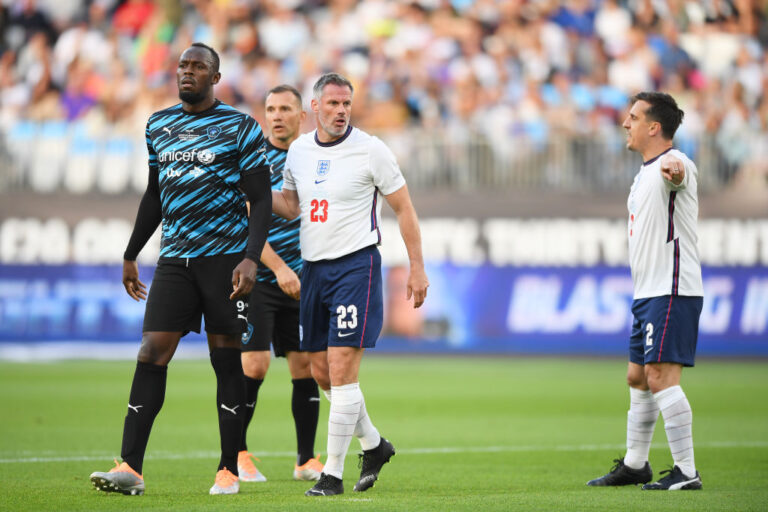 Jamie Carragher had the unenviable task of marking 100-metre world record holder Usain Bolt during Soccer Aid – and it’s fair to say he had his work cut out at times.

The Liverpool legend lined up for England in the heart of defence alongside his Sky Sports punditry partner Gary Neville.

Against them was World XI captain Bolt, the fastest man in the world. When the Jamaican athlete set his 100m world record time in 2009, he hit a top speed of 44.72 km/h during his run.

Despite being retired from active competition since 2017, and now at age 35, Bolt still has superhuman speed. And he showed it during Soccer Aid last night.

During the first half of the Soccer Aid match between England and World XI – which the latter won on penalties – Jamie Carragher found himself in a foot race with Usain Bolt.

As you would expect, there was only one winner. Bolt raced through on goal, but couldn’t trap the ball underneath his foot.

A grateful Carragher managed to get back and clear the ball away for a corner.

What happened next, however, should go into the annuls of Soccer Aid history. Following his race against Bolt, the cameras panned to the exhausted former England international.

Carragher simply mouths: “F***ing hell”, before laughing as he makes his way into position for the set-piece.

Later in the match, Carragher found himself with the same problem, as Bolt ran towards goal. However, this time the 44-year-old seemingly didn’t want any of the earlier sprint, and simply hacked his opponent down in the centre of the pitch. It was probably the right decision.

Taking to social media after the game had finished, Carragher was quick to refer to his ongoing battle with the Jamaican sprint legend.

He tweeted a photo of himself and Bolt with the caption: “When Usain Bolt tells you he’s not that quick anymore”. An eyes emoji accompanied the post, clearly referencing that Bolt is still exceptionally fast.