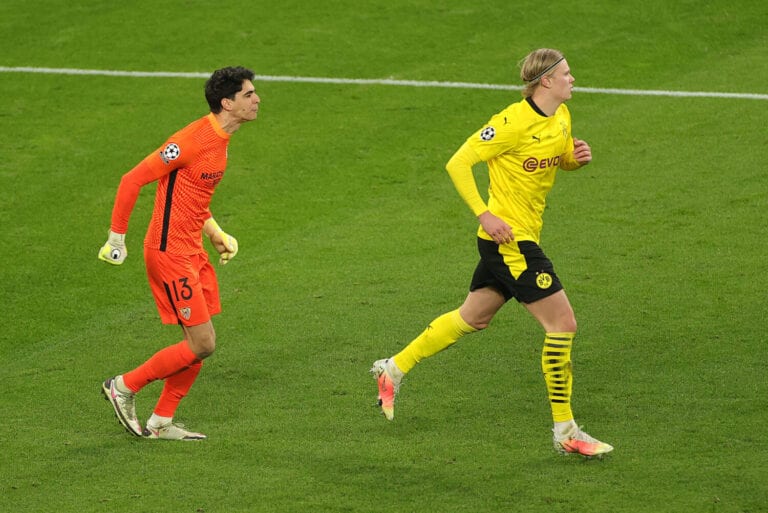 Erling Haaland‘s second goal of the night in Borussia Dortmund‘s 2-2 draw with Sevilla in the Champions League on Tuesday evening had a bit of everything.

Firstly, the Norwegian tucked the ball away from close range after muscling past Fernando.

But VAR ruled the goal out, adjudging Haaland to have fouled the Sevilla midfielder.

They then rolled back play and awarded a penalty to Dortmund for an earlier foul, giving Haaland another chance to add to his earlier sidefooted finish.

His spot kick was originally saved by Sevilla goalkeeper Yassine “Bono” Bounou. However, the stopper was ruled to have left his goalline in making the save, and the penalty was re-taken.

Finally, six minutes after the Norwegian had originally put Dortmund two ahead, he had his brace for the night.

Then, in response to Bono’s celebration after making the first penalty save, Haaland ran and screamed into the ‘keeper’s face. That sparked chaotic scenes between the teams, with Haaland and Sevilla’s Joan Jordan both receiving yellow cards for the incident.

Despite Sevilla scoring two second-half goals to make it 2-2 on the night, Dortmund progressed to the quarter-finals 5-4 on aggregate.

Asked post-match why he decided to celebrate in that manner, the 20-year-old explained to Sky: “I missed and he cheated and I took it again and then I scored when he didn’t cheat.

“It was exactly the same but then he stood on the line and first he didn’t stand on the line.

“To be honest, I was nervous a little bit for the second one, but after he was screaming in my face after the first one, I was thinking it would be even better to score another goal.

“That’s what happened, and that was nice.”

In response to a question about what he said to the Sevilla stopper, Haaland replied: “I don’t know what it means but I said what he said after I missed the first one.

“Maybe it’s karma in this world.”

Haaland’s pair of strikes meant that he has now scored 20 goals in 14 appearances for both Dortmund and previous club RB Salzburg.

He is the quickest player ever to reach the 20-goal landmark in the competition.

The Norwegian unsurprisingly tops the scoring charts for this season’s Champions League, with 10 strikes in six appearances. Five of them have come against Sevilla.

The draw for the Champions League quarter-finals takes place on Friday, March 19.