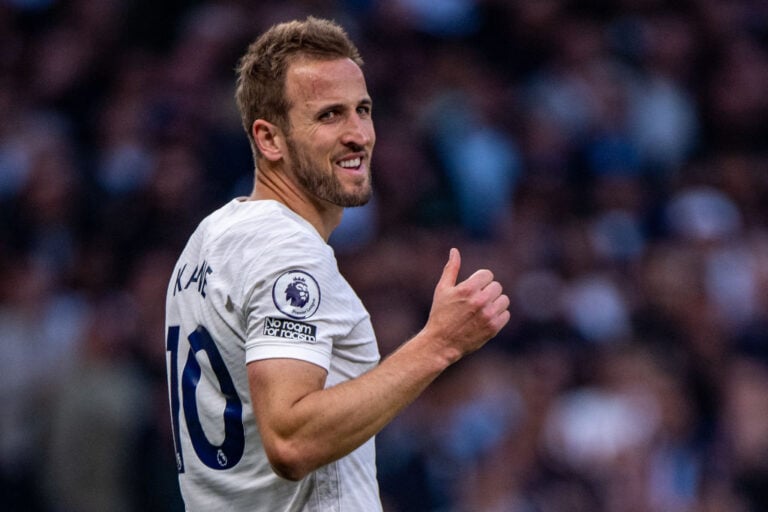 Harry Kane gave a quick-witted comment back to Thomas Tuchel after the Chelsea boss gave him a friendly, but heavy-handed, ‘slap’ on the back during an interview.

Kane and Tuchel were on opposing sides as Chelsea and Tottenham played out a 2-2 draw in a fiery London derby.

Summer signing Kalidou Koulibaly scored a fine volley to put the hosts 1-0 up at Stamford Bridge in the first half. Despite their early dominance, Chelsea had just the one goal at half-time.

In the second half, tempers flared after a Spurs equaliser controversially stood, despite an apparent foul on Kai Havertz in the build-up. The coaches of both teams ended up face-to-face in a brief fracas that earned Tuchel and Conte yellow cards.

Ten minutes later, Thomas Tuchel was sprinting down the touchline in celebration as Reece James restored Chelsea’s lead. Unfortunately for the Blues, Spurs snatched a point in injury time via a Harry Kane header.

As a result, both teams sit on four points from their opening two matches. Spurs are fourth in the table. Meanwhile, Chelsea lie seventh.

After the game, Tuchel and Conte both received a red card for another altercation, this time caused by disagreements over a handshake. In a post-match interview, Tuchel gave an insight into the dramatic scenes that unfolded.

Following such a contentious match, emotions were clearly riding high. Thomas Tuchel believes that this contributed to the managers’ red cards.

“I thought when you shake hands, you look into each other’s eyes,” explained the Chelsea boss, via Sky Sports. “And Antonio had a different opinion. So, he was happy when he equalised, and it got a bit heated but nothing big.

“I think the red card is unnecessary, but a lot of things were not necessary. Another poor decision from the ref today.”

In a later press conference, the German was in good spirits, even jokingly flexing his biceps before addressing the media. He also played down his altercation further in said presser.

“It’s like two players who had a bit of fight on the field, and nothing happens,” he said. “Nobody gets injured, and the players, if you have a hard or fair tackle, if you don’t go and apologise, there’s no need.

“It’s Premier League football, and the two managers got involved today because both of us were fighting for our teams. That was it. Nobody got insulted, nobody got hurt. We didn’t have a fist fight or something. For me, it’s not a big deal.”

Before this, Tuchel even had time for a humorous exchange with Tottenham’s Harry Kane, briefly disrupting the forward’s interview.

As the England captain duly fulfilled his post-game press responsibilities, Tuchel walked past and gave him a quick tap of respect.

However, the Chelsea boss may not have realised how much power he put into his action. Instead, Tuchel gave Harry Kane what sounds like a big whack on the back. Although there is only an audio clip (from Reddit), you can clearly hear Kane release a grunt of pain from an impact.

Immediately after, listeners can just about hear a quick “sorry” from Thomas Tuchel. Thankfully, the Spurs man saw the funny side of it, firing back a comedic quip at the German.

“That’s another red, isn’t it?” joked Kane, prompting laughs from Tuchel and the interviewer.

It seems that any animosity between the two sides was left out on the football pitch on Sunday. Clearly, Harry Kane and Thomas Tuchel have a lot of respect for each other.