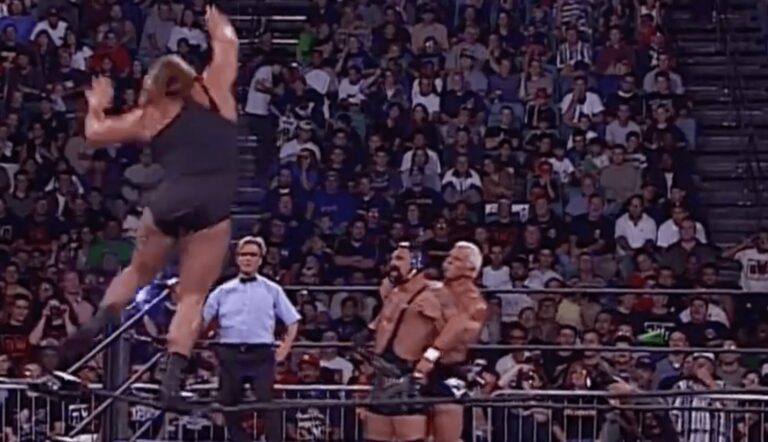 During a match in his WCW days, Big Show landed an outrageous missile dropkick, proving he has far more in his locker than sheer size and power.

Standing at a whopping 7ft tall, ‘The World’s Largest Athlete’ stands as one of the most terrifying wrestlers on the planet. With a lethal one-punch knockout at his disposal, and 383 pounds of pure mass to back it up, wrestlers around the world fear the day they have to set foot in the ring with Big Show.

However, with the obvious nature of his physical qualities, fans often neglect to notice his undeniable athleticism. The seven-time world champion has spent his career showcasing his almost paranormal skills. Despite his size, he can produce some outrageous manoeuvres, the most impressive of which came during his stint in WCW.

Long before he went by Big Show, Paul Wight operated under the name ‘The Giant’, which, judging by his appearance, fitted him just as well. Therefore, with his size considered, the idea of looking up at him on the top rope can’t be ideal.

But regardless, the man mountain climbed to the top turnbuckle and appeared set to unleash a brutal blow. With the elegance of a gymnast, he dived through the air and landed an incredible Missile Dropkick.

However, his opponent moved out the way, and he ended up connecting with his teammate, Scott Steiner. This obviously wasn’t ideal. But it didn’t take away from the impressive move itself.

This isn’t the only example of Big Show defying the laws of physics. On one occasion, the wrestler even managed to pull off a Moonsault and even elbows from the top rope. In one interview, the wrestler, who now goes by Paul Wight in AEW, described his insane repertoire.

The icon said: “I had athleticism that was crazy for a man of my size. I could do Kick-ups, I could do dropkicks, dropkicks off the top. And Moonsaults.”

Watch the clip below: