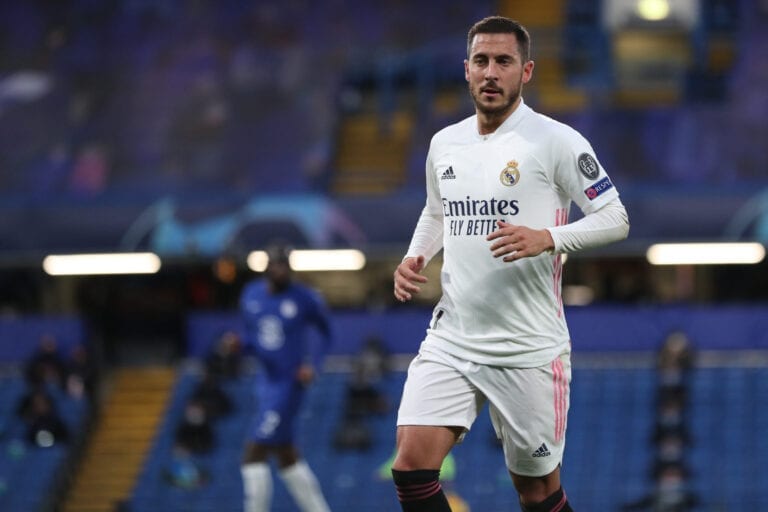 Wednesday May 5, 2021 is not a day that will be remembered fondly by Eden Hazard and Real Madrid.

It was the night Real were knocked out of the Champions League at the semi-final stage, losing 2-0 to Chelsea at Stamford Bridge to consign them to a 3-1 aggregate defeat.

Hazard, meanwhile, made his return to the club that he left to move to Spain in 2019. The Belgian started his second game in a row in what has been an injury-disrupted season but couldn’t help to inspire Real through to the final, and was substituted after Chelsea scored their second goal.

The 30-year-old was then spotted on camera laughing with Chelsea’s Kurt Zouma after the game, with the pair having previously been team-mates in London.

That didn’t go down well in Madrid and with the Spanish press.

Spanish football chat show El Chiringuito opened up with dramatic music, the image of Hazard laughing as the backdrop and presenter Josep Pedrerol rubbing his hands together.

You don’t need to speak any Spanish to know what Pedrerol’s feelings were about the incident.

Hazard has since posted on Instagram and apologised to Real Madrid fans.

He said: “I am sorry. I have read lots of opinions about me today and it was not my intention to offend the Real Madrid fans.

“It has always been my dream to play for Real Madrid and I came here to win.

“The season is not over and together we must now battle for La Liga! Hala Madrid!”

Zinedine Zidane’s side take on fourth-placed Sevilla at home in their next fixture on Sunday. Atletico, meanwhile, take on third-placed Barcelona, meaning it should be a blockbuster weekend in Spanish football.