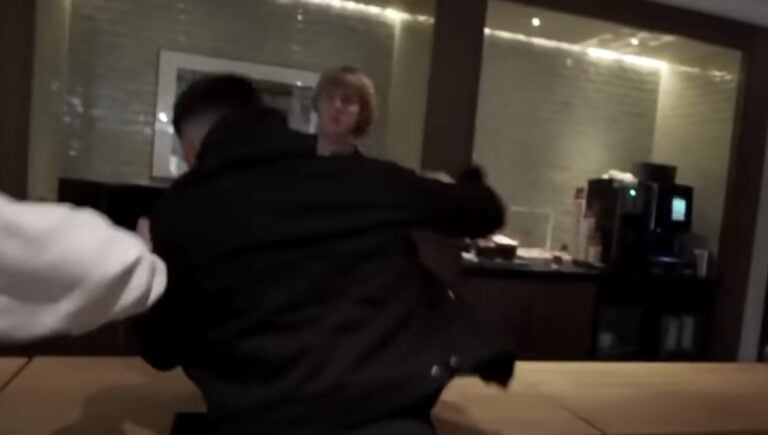 Following a heated Twitter back and forth, Paddy Pimblett and Ilia Topuria finally met in person, and things got ugly.

In April 2021, the pair of UFC athletes engaged in a social media war that escalated way too far. The English fighter offended a large portion of the MMA community with a deeply offensive tweet.

He said: “Lad, how stupid are these Georgians man … no wonder the Russians terrorise their lives.”

Although ‘The Baddy’ later apologised and deleted the post, the remark understandably upset many people. The joke, which belittled many innocent victims losing their lives, completely crossed the line.

It’s not the first time the Liverpool fighter has made offensive comments. He found himself in hot water last year for tweeting that GB star Muhammad Mokaev shouldn’t be able to represent his adopted country due to him being born in Russia.

He said: “You wear that flag as a fraud. You’re not from here, you idiot.”

His insensitive comments over the years have angered many fighters, especially Topuria. So when the 11-0 prospect encountered his rival during fight week, he reacted furiously.

Read: Paddy Pimblett thrown out of Watford vs Liverpool for celebrating in the home end.

The Georgian spotted the controversial athlete in the fighter hotel lobby and instantly approached him. He appeared to launch a cup before Pimblett threw back a bottle of hand sanitiser. Things then boiled over as Topuria threw a punch.

Ultimately they got split up before things got too physical, but that didn’t stop them from exchanging insults. The Englishman called his adversary a “maggot” while Topuria referred to his rival as a “bitch.”

Unsurprisingly, the two men have completely different versions of events. Pimblett gave his breakdown of the confrontation at the press conference.

He said: “He walked towards me and I said ‘what’s happening lad?’ As he got close to me, he swiped a slap at me. Do you know what I mean? Obviously, lad, if you raise your hand to me, I’m going to do something. So I wasn’t punching him because I’m not breaking my hand and not being able to fight and earn my money at the weekend.

“So I stepped back and picked up the hand sanitiser and bounced it off his head, and then he swung a dig, and I moved out of the way of it with ease. He’s just got a bit of small man syndrome, lad. Do you know what I mean? He’s only 5 ft 7, isn’t he? So you’ve just got to leave the little men to it.”

The Georgian doesn’t appear particularly concerned with being hit with hand sanitiser. In his mind, he proved his point and honoured his country. He tweeted that he had Pimblett shaking in his boots.

The 25-year-old said: “I warned you! This is what happens when you disrespect me and my country! You saw me and wanted to greet me because you s**t your pants, and you should thank my team because of it wasn’t for them separating me, I would have taken your head off.”

Both men have an opportunity to make a statement at UFC London. But sadly for fans, it won’t be against each other. Topuria has a contest scheduled against Jai Herbert, while Pimblett has to get past Rodrigo Vargas.

But if they both win in explosive fashion, the UFC may give them their opportunity to settle their beef in the cage.