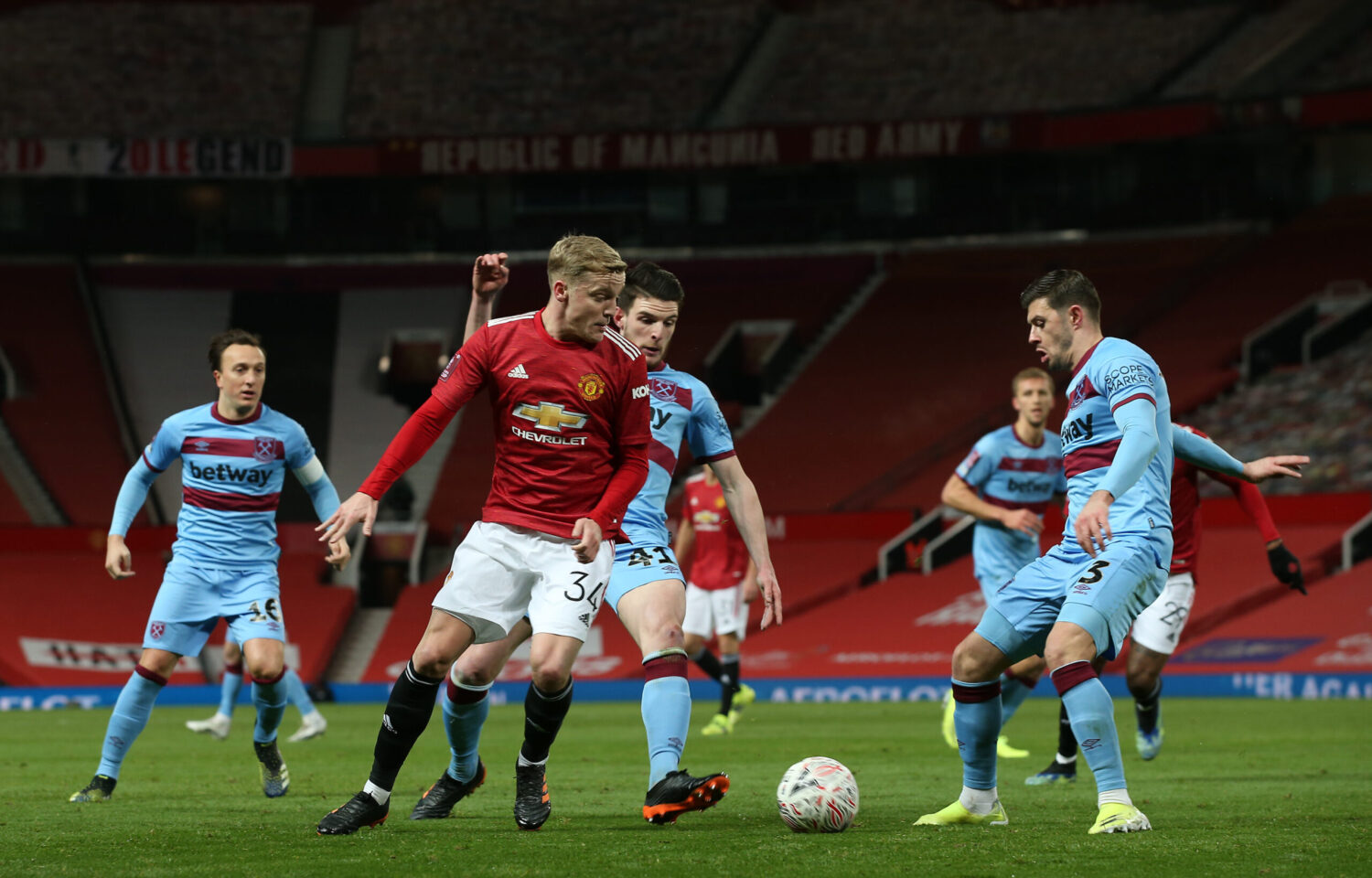 Donny van de Beek’s time at Old Trafford has gotten off to a tricky start, with first-team appearances being offered at a premium to the midfielder.

Despite coming with glowing reviews from both Ajax and the Dutch national team, van de Beek for whatever reason, has found it difficult to pull a string of games together at United.

Appearances have been limited to cup games, meaning the midfielder hasn’t been able to find any kind of rhythm. Obviously it’s still very early days in his United career, but so far circumstances haven’t been the kindest to the 23-year-old.

Set up to fail?

While there’s always at least some element of self-responsibility on the player, van de Beek hasn’t been helped when employed in an unnecessarily negative midfield.

One of his last notable appearances came in the FA cup tie against West Ham, a game in which it became apparent that there was no real need to have both Fred and Nemanja Matic on the pitch from the first ten minutes. Matic in particular, whose strength lies firmly in breaking up play, was redundant against a team packing eight men behind the ball.

Immediately in that situation, van de Beek becomes the only real forward-thinking player in that midfield three, tasked with trying to unpick a side set up solely to prevent that.

That situation gets even tougher when considering the fact that Anthony Martial is hardly a ‘traditional’ centre forward. While again, immensely talented, he doesn’t possess that same knowhow when it comes to moving defences off the ball the same way Edinson Cavani does.

What’s left is a number 10 who has been afforded very few opportunities in the side, stuck between a defensive midfield two that he can’t link-up with and a striker who offers very little off the ball, against a bank of eight defenders.

While Ole Gunnar Solskjaer deserves a huge amount of praise for the work he’s done at United, probably more than he’ll ever actually get, some of his decisions do leave us scratching our heads.

Against West Ham, and other opponents who set up in a similar fashion, two defensive midfielders simply aren’t needed. There’s no doubting that the Dutchman’s strength lies in and around the edge of the area when he has someone to find with one and two-touch passes.

Slot him in the team alongside Bruno Fernandes and Edinson Cavani, and suddenly the spaces in which he excelled for Ajax, begin to open up.

Fitting both him and Bruno in against more attacking opposition may be considered too risky on most occasions, but against defensive teams, it feels very much like a no-brainer. Perhaps that means employing him a slightly deeper pivot role, as opposed to the 10 position that Fernandes fills so well – but he proved at Ajax he’s more than capable of doing just that.

Ajax’s academy is literally famed for ensuring players can fill different positions, there’s no reason van de Beek being a number 10 should be set in stone.

Unfortunately for VDB, the comparisons with United’s talisman are inevitable – but don’t really mean much.

Both are very, very different attacking midfielders. Bruno is a high-risk-high-reward player, few players in the side give the ball away more than him, but that’s expected when he’s constantly looking for the killer pass, or is willing to take a shot on if nothing else presents itself.

Donny’s footballing education lies in more intricate, possession-based moves. It’s the sort of thing that requires far more time to build an understanding with teammates, and also relies on constant movement off the ball – which is has become an issue against sides setting up in a low block .

We’ve seen plenty of players come to the Premier League and struggle in their first season, only to go on and prove their brilliance.

Fellow Dutchman Dennis Bergkamp famously found it difficult when he first joined Arsenal, and he turned out to be quite good.

More recently Fabinho couldn’t get in the side when he joined Liverpool, Joao Cancelo was the same at City – this is hardly the first time a player hasn’t hit the ground running.

There is clearly huge talent there. Following Ajax reaching the Champions League semi-final in 18/19, he made the 30-man Ballon d’Or shortlist and he’s been a regular starter at international level since making his debut in 2017.

Is the situation frustrating? Yes. Are his days already numbered? We certainly hope not.