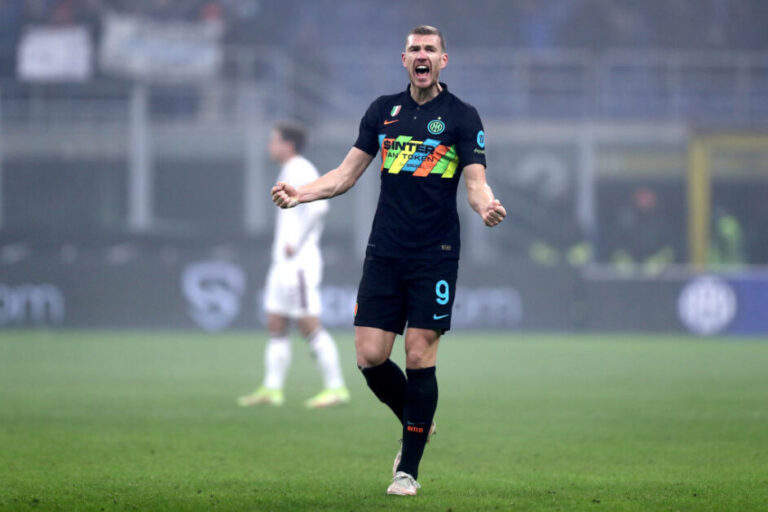 When thinking about top-flight number nines, Edin Dzeko might not be the first striker that comes to mind.

However, his stats and medal haul deserve recognition. At 35, he’s one of the most underrated players in Europe. A top act on and off the pitch, you can always count on Edin Dzeko. His consistency and professionalism rank among his highest qualities.

The Bosnian striker has been among Europe’s elite since the 2008-09 season when he scored 36 goals for Wolfsburg.

Last summer, he was handpicked by Inter as Romelu Lukaku’s replacement. So far, he’s been up to the job.

One of the reasons why Lukaku’s potential Inter comeback was immediately mocked is that the Nerazzurri fans don’t miss him at all.

Part of that is on Lukaku’s whiny demeanour. Last week, Inter’s Curva Nord fans gave Lukaku a piece of their mind with a banner placed in front of San Siro.

The banner read, “It doesn’t matter who runs away in the rain. It counts who stays in the storm. Bye, Romelu.”

Edin Dzeko is an exemplary veteran

There is a more prosaic reason why Inter fans have gotten over Romelu Lukaku.

Dzeko’s quiet leadership has Inter sitting comfortably on top of the Serie A table halfway through the season.

Off the pitch, the Bosnian veteran stands in direct opposition to Lukaku. Whereas the Chelsea forward is known for public outbursts, Dzeko’s style is low-key and subdued. He leads by example with his goals, not with his words.

It hasn’t taken Dzeko long to adapt to his new club. He has linked up perfectly with star Lautaro Martinez, the team’s top scorer with 11 league goals.

Spearheaded by Dzeko, Inter’s attack is the best in Italy this season. They have scored 49 goals in 19 games – nine more than their neighbours and rivals AC Milan.

12 of those goals bear Dzeko’s signature. He has seen the back of the net eight times and assisted his teammates on four different occasions.

Dzeko’s performance in the Champions League is even better, with three goals and one assist in just six games. He was instrumental for his team to advance to the last 16, where they will face Liverpool.

Jurgen Klopp’s defence will have to step up if they want to keep a clean sheet against Dzeko’s Inter.