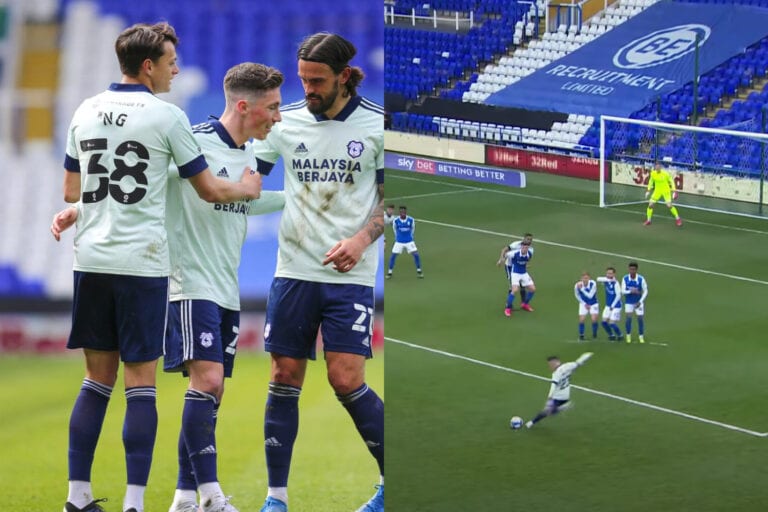 Harry Wilson scored an incredible hat-trick for Cardiff City in their 4-0 win over Birmingham City in the Championship on Saturday.

The Liverpool loanee made it seven goals for the season, having joined Mick McCarthy’s side in October.

His first goal was an incredible outside of the foot shot that arched into the top right corner over a helpless goalkeeper, with Birmingham having given the ball away cheaply in the defensive third.

The 24-year-old’s set piece ability was on show in his second goal, as he curled the ball low round the opposition wall and into the bottom corner.

His third strike – again a free-kick – was perhaps the best of the bunch. Completing a hat-trick of goals with his left foot, Wilson struck an unstoppable inswinging effort straight into the top left corner.

Check out all three goals below:

Bluebirds boss McCarthy was full of praise for Wilson after the game, calling his treble “as good a hat-trick as you’ll ever see”.

He told BBC Sport: “It’s as good a hat-trick as I’ve ever seen. It was fabulous.

“The first one is absolutely awesome. It was sublime, that. The outside of his left foot, not really set to hit it and he pulls that out.

“The second one, he bent it around the wall and the third one just popped the tin hat on it.

“It was wonderful. As good a hat-trick as you’ll ever see.”

Cardiff currently sit in eighth place in the Championship, and although they cannot reach the play-offs, they could overtake seventh placed Reading with a win in their last game of the season against relegation-threatened Rotherham on Saturday.

Wilson, meanwhile, is set to return to Liverpool at the end of the season although there are doubts as to where his long-term future lies.