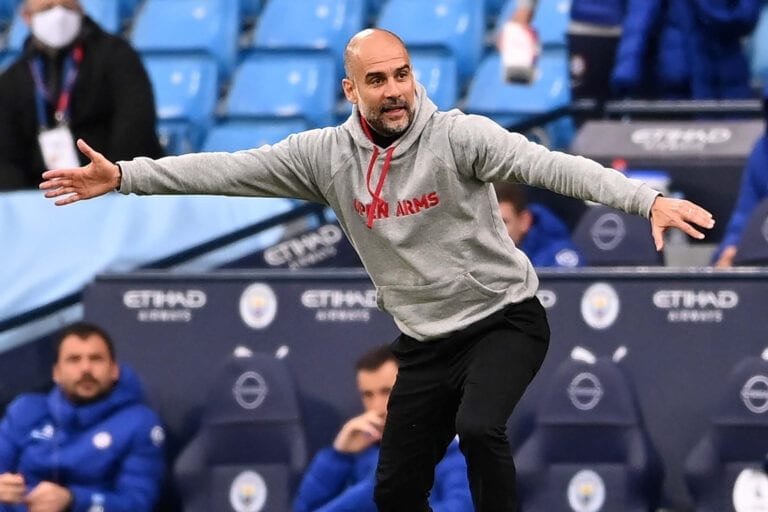 Anyone thinking Pep Guardiola might have gotten a bit bored of winning titles by now couldn’t be more wrong judging by the Manchester City manager’s celebrations.

One week ago, City reclaimed the Premier League crown from Liverpool courtesy of Leicester’s win over Manchester United. It may not have been the way fans had envisaged completing their ascent back to the top of the mountain, but getting the job done was welcomed all the same.

There is still of course, the small matter of the club’s first ever Champions League final. There’s just under two weeks to go until the big night in Porto where they’ll lock horns with Chelsea, in what will be just the third all-English final in the history of the competition.

Still, while preparations are well underway for that clash, Guardiola and the squad were still able to take time out to really embrace and celebrate their third PL title win in the last four years.

The boss. Cool as fuck 😎 pic.twitter.com/lFM5GLiZvN

Guardiola is seen with a cigar in hand, possibly a few bevvies in, singing his heart out to Don’t Look Back In Anger by Oasis. If there’s something more Manc trending in the world right now, we’d love to see it.

Under the tutelage of Guardiola, Manchester City have been on one of the most unbelievable runs we’ve seen in the recent history of the Premier League. They’ve gone from lingering seemingly miles off silverware, to exploding into life around Christmas time, stringing together an insane 21 consecutive wins across all competitions.

If they’re able to win their remaining two league games they’ll finish on 89 points, and even though that doesn’t come close to their 100 points from 2017/18, this has shown a whole new side to this City team.

The champions are back in action this evening with a 7pm kickoff against Brighton & Hove Albion.