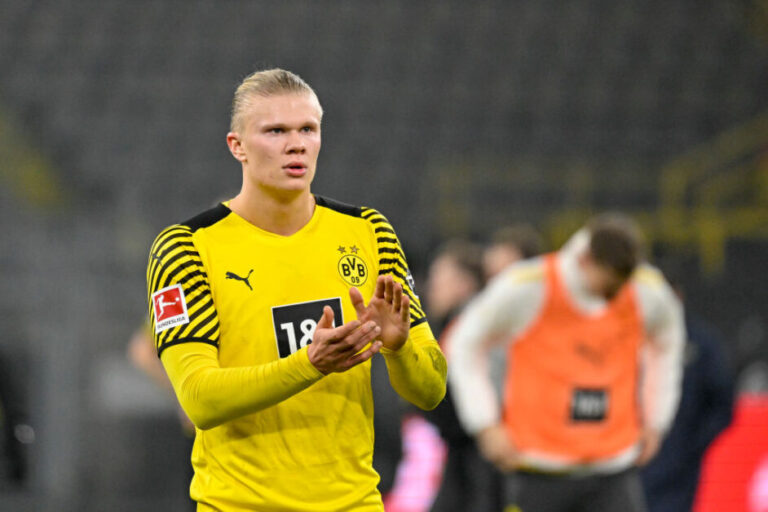 Erling Haaland is undeniably one of the greatest talents on the planet. But these alarming stats could pull the plug on his dream move.

The Norwegian rose to prominence throughout his time at Borussia Dortmund. He’s captivated Bundesliga fans with sensational movement and natural-born goal-scoring ability. Haaland’s positioning is fantastic. He always knows where to be and when to be there. This skill has led to a whopping 56 goals in only 57 games.

His sublime talent has attracted admirers from all over Europe. And with a plethora of those teams planning to make a move, BVB have to resign themselves to the fact that he won’t be there next season. However, with the rest of the campaign left to play, fans hoped that he could enjoy a final dominant run at the Signal Iduna Park.

But this hasn’t been the case.

Stats that could derail an Erling Haaland move

In recent times, the 21-year-old has suffered from three different knee issues and reported muscular issues on three separate occasions. He also missed a month due to a hip flexor problem. He’s spent a total of 90 days on the sidelines and missed 16 games. Therefore, with his club currently in second place in the league and nine points behind Bayern Munich, you have to wonder how much of that they could’ve made up had he not suffered from all these injuries.

These injuries will undoubtedly frustrate the player. Granted, he’s got all the credentials to become a future footballing legend. But elite-level clubs may see a risk in investing considerable sums in a player who’s become so injury-prone at 21.

The forward is linked to multiple sides, including Spanish giants Barcelona and Real Madrid. In December, his agent Mino Raiola met with club president Joan Laporta in Turin to discuss a potential move to the Nou Camp. But due to Barca’s current financial issues, a move there seems unlikely.

It’s more realistic that Haaland goes to Madrid. They could easily afford his €75 million release clause, and a secret meeting could lead the player right to the Bernabeu. However, he has plenty of options outside of La Liga.

According to Football Insider, Pep Guardiola’s Manchester City are leading the race for his signature. While PSG are also in the hunt as they view him as a fantastic replacement for Kylian Mpabbe.

It seems that his injuries have had little to no impact on the interest he’s generating. So long as he can maintain his fitness, he’s got a very bright future ahead.