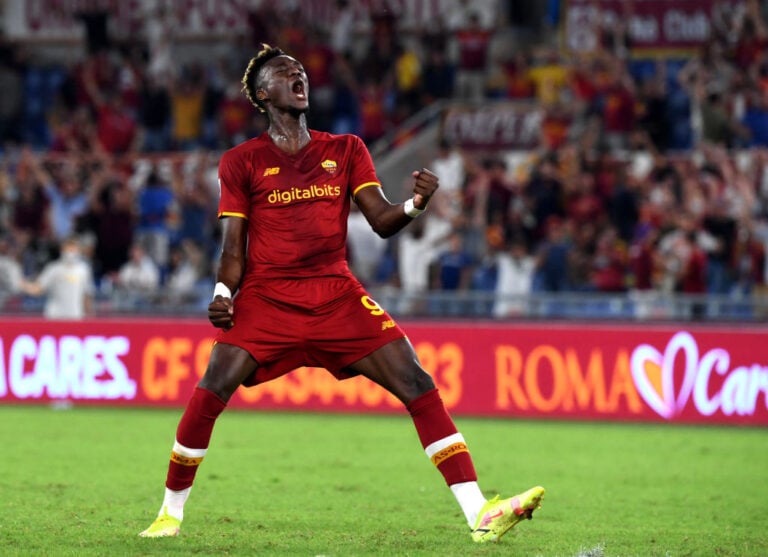 Tammy Abraham made his Serie A debut for Roma last night – and he certainly hit the ground running.

The 24-year-old, who signed from Chelsea for a fee of £34 million last week, was handed his first start by new Roma boss Jose Mourinho for their clash against Fiorentina.

Abraham drew a foul from Fiorentina’s Bartosz Dragowski, resulting in the goalkeeper being sent off, before assisting Henrikh Mkhitaryan’s opening goal.

The pair then combined for Roma’s second goal of the night. The Armenian played through Abraham, who squared the ball to Jordan Veretout to finish calmly.

The linesman originally judged the England forward to be offside, but VAR overturned the decision.

Abraham was substituted on 68 minutes and replaced by fellow new signing Eldor Shomurodov, to a loud standing ovation from his new home supporters.

Mourinho’s side went on to win the game 3-1. Veretout scored his second goal of the night late on.

The Italian media heaped praise on Abraham’s performance after what was a stunning debut.

Gazzetta Dello Sport called him “without a doubt, the best on the pitch”, and added that Abraham’s “star shines”.

And Corriere Dello Sport described him as “the great protagonist of an almost sold out [Stadio] Olimpico”.

In a Twitter poll posted by Roma’s English account, Abraham won the man of the match award ahead of Veretout and Mkhitaryan.

Speaking about Abraham and his decision to give him a debut start, Mourinho told club media after the game: “I decided to start him because, as a target man to work off, he’s better in that role than Shomurodov.

“Eldor is more of a mobile player who, when he came on, I was thinking that those spaces in behind their defence were made for him to attack.

“Tammy wanted to come off but, even if he hadn’t been tired, I would have made the same change because Shomurodov is very dangerous when he attacks the spaces, whereas Tammy is more involved in the hold-up.

“We knew that they would try to press us high and, when that happene,d Tammy did well to drop in and help hold up the ball – it came to his feet and that allowed [Lorenzo] Pellegrini and Mkhitaryan to get behind him and start to build the play forward.”

Roma are next in Serie A action on Saturday. They travel to face newly-promoted Salernitana.