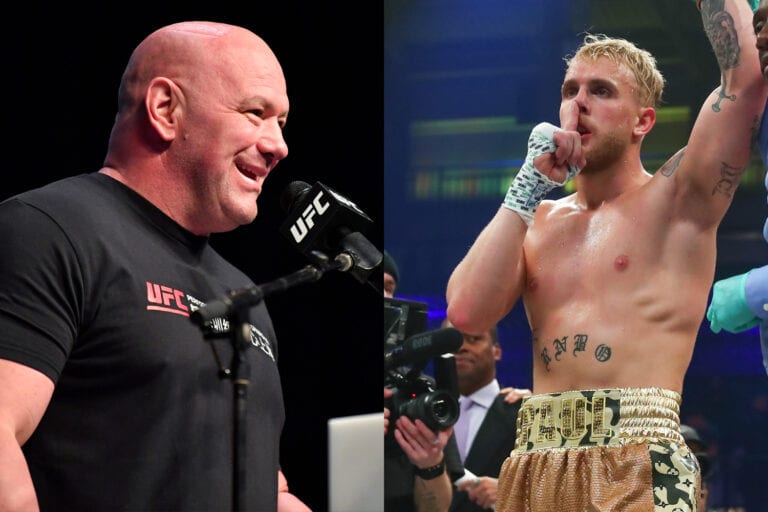 Jake Paul has responded to Dana White with a challenge after the UFC president said he will place a $1 million bet on his upcoming fight with Ben Askren.

Paul takes on former Bellator welterweight champion Askren in a professional boxing bout on April 17. He is currently favourite with the bookmakers to secure victory.

Appearing on Mike Tyson‘s podcast ‘Hotboxin”, White said that he will place a seven-figure bet on Paul to lose on the night.

In response, Paul took to Twitter and posted a video challenging White to up the ante even further.

It is, of course, not the first time Paul has spoke about a major figure in the world of combat sports, with the likes of Conor McGregor, Nate Diaz and Canelo Alvarez on the receiving end of call-outs from the 24-year-old.

In the video to White, Paul is seen reacting to the UFC president’s interview, and in reference to the bet says: “Let’s double it up.”

Above the video, he tweeted: “Dana let’s double the bet up!

“$2 million. We wire the money into escrow. $4 million total. Winner takes all.

“My team will be in touch to make a contract.

“After I knockout Ben, we can set up Jake Paul vs. Dana White 2021 since you consider yourself a “Boxer” and me a “YouTuber”.

Paul gearing up for another professional fight

Paul’s fight against Askren will be his third in professional boxing.

Prior to that, he faced off against another YouTuber – Deji – in a white-collar boxing fight, which Paul also won.

His brother Logan is due to take on Floyd Mayweather Jr. in an exhibition match later this year.