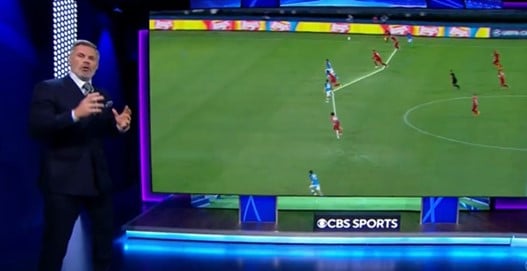 Jamie Carragher provided some brilliant tactical insight as he broke down what went wrong for Liverpool during their 4-1 defeat at the hands of Napoli on Wednesday.

Jurgen Klopp’s team had a night to forget at the Diego Armando Maradona Stadium.

The visitors got off to a disastrous start, as James Milner conceded a penalty in the opening few minutes. Napoli’s Piotr Zielinski duly dispatched the spot-kick, giving the Italian side an early lead.

Despite missing a second penalty, Napoli’s energy and persistence paid off when ex-Fulham midfielder, Andre-Frank Zambo Anguissa, doubled their lead on the half-hour mark. His goal came via a brilliant one-two with Zielinski and a cool finish.

Then, just before half-time, the hosts made it 3-0. Substitute Giovanni Simeone scored just minutes after coming on, following a mazy run from starlet Kvicha Kvaratskhelia.

At the start of the second half, Jurgen Klopp brought on Joel Matip for Joe Gomez. However, this did not have the desired effect as Napoli grabbed a fourth on 48 minutes. Zielinski added his second of the night with a deft rebound finish.

A swift response, thanks to an excellent Luis Diaz strike, gave the Reds some hope, but Napoli saw out a 4-1 win. It was nothing more than the Italian outfit deserved from their superb performance.

Meanwhile, Jurgen Klopp and his team have to re-group and re-set themselves. The poor performance worried former Liverpool defender Jamie Carragher, who was a pundit for the game on the US channel CBS Sports.

Speaking after the thumping on CBS Sports Golazo, Carragher shared his concerns over the shaky start that Liverpool have made to 2022/23.

“The problem tonight is not that game. Forget this game,” said Carragher. “For me, the big worry is, is this going to carry on through the season? Is this the end of a cycle? Have Liverpool massively got their transfer ideas in the summer wrong? Because this team looks so far off it.”

Jurgen Klopp’s side have not had the best start to their season. Aside from the Bournemouth annihilation and the 0-0 Merseyside derby, they have gone behind in every game so far. Clearly, something is not clicking for the Reds.

Carra then took an in-depth look at Liverpool’s on-pitch woes against a brilliant Napoli side.

Following some post-match comments, Jamie Carragher went over to the tactics screen to break down the Liverpool defence.

“So, you look how high Liverpool’s line is. That is not a problem. It’s about being compact, being together. But, when someone gets time on the ball, Joe Gomez actually has a yard on the striker of Napoli. But he then stops and puts the brakes on. You can’t put the brakes on when someone has got time to get their head up.”

The former Reds defender then explained how Liverpool’s midfield frailties mean that the defence needs to adjust.

“So often, as we’ve said before the game, it is too easy to get through Liverpool’s midfield. That didn’t happen before, so you could play the high line and be really compact. If that’s not happening, you have to adapt.

“When the ball comes back, and you know a player is going to play it forward first time, you have to go back. All I’m talking about is [back] five yards. When that ball is there, and you know he’s going to kick it, you go back. And, if he doesn’t pass it, you’ve only gone two yards, and you’re back to your line. If he does kick it, you’re off [running].

“But they don’t run, and Napoli get in again. It’s embarrassing, it really is.”

Thanks to the packed fixture schedule, Liverpool only have a few days to recover before facing Wolves this weekend.