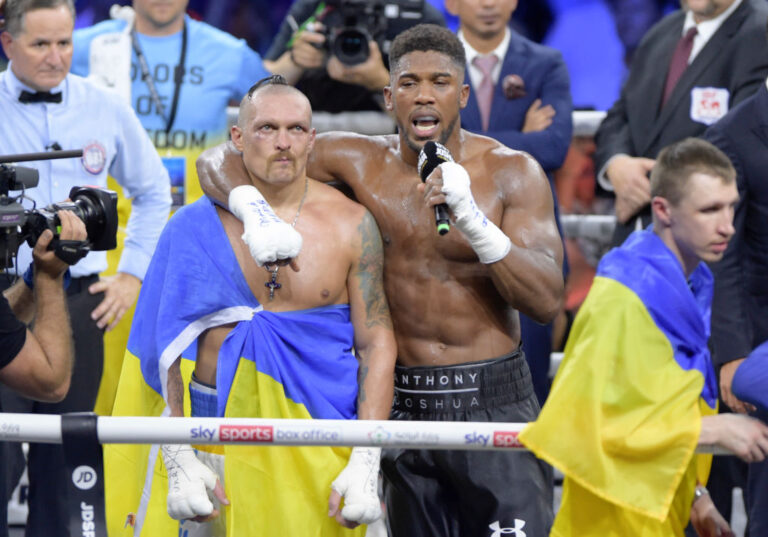 Oleksandr Usyk believes he has the tools to help Anthony Joshua beat Tyson Fury in one of the biggest fights in British boxing history.

On August 20, AJ failed in his quest to reclaim his belts from the Ukrainian southpaw. Despite coming into the bout with different tactics and a new trainer, he couldn’t find a way through his opponent’s impenetrable defence.

Usyk utilised his flashy footwork and sublime shot selection to run away with a comprehensive victory, which prompted the Brit to make one of the most iconic speeches in sporting history.

Off the back of this, fans expected the former champion to take a much-needed rest before returning against an opponent like Zhilei Zhang or Jarrell Miller. But in a complete shock, it’s looking like he’s going straight into the biggest test of his career.

After defeating Dillian Whyte in April, Fury hung up the gloves. However, combat sports experts were all united in believing that his retirement probably wouldn’t last for long. Therefore, when he announced his return later in the year, not many were surprised. But he took everyone aback with his offer to fight Joshua.

‘The Gypsy King’ called his nemesis out on social media, and consequently, Frank Warren and Eddie Hearn have started working together to get the bout made. And now Usyk has stepped forward to help AJ prepare.

In an interview with Sky Sports via Boxing Scene, the two-weight world champion said:”‘If he needs my help, I will go to his camp and help him. He is not 40 years old, he is 33, so he should keep working – Anthony, don’t stop.

“I understand that he wanted to win against me, but Anthony can’t give up. He must go forward.”

On Joshua’s controversial post-fight speech after his recent defeat, the Ukrainian remarked: “It’s wrong to think that [Joshua] had stolen my moment. He said what he wanted. Thank God the victory was mine.

“Anthony cannot be judged by what he did. He is a top-level athlete, and a good person. He made a mistake. I’m sure he did it with no anger. He was disappointed with his defeat, and he was sad.”