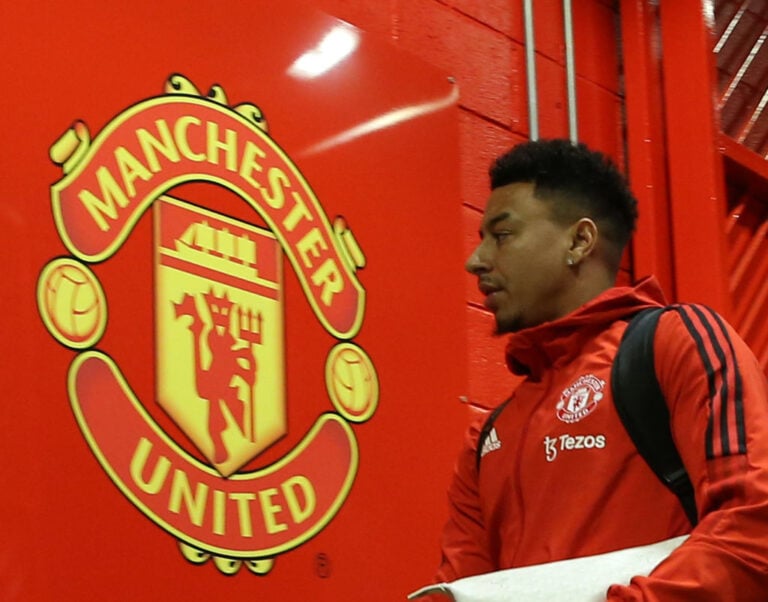 There were plenty of farewells for departing Man United players last night. However, there was not one for Jesse Lingard, whose brother slammed the Old Trafford club over their decision to not let Lingard say a proper goodbye.

United ran out 3-0 winners against Brentford in their final home game of the season. Goals from Bruno Fernandes, Cristiano Ronaldo and Raphael Varane helped the Red Devils cruise to victory. The match signalled the end of an era at Man United, with a number of players saying goodbye.

Spanish midfielder Juan Mata got a rare start in his last game at Old Trafford in a United shirt. In addition, Nemanja Matic played his last home game in Manchester, with Edinson Cavani coming off the bench to do the same.

All three have expiring contracts in the summer, as do Paul Pogba and Jesse Lingard. Whilst Pogba was injured, Lingard was ready and available on the substitutes bench. Despite this, and his imminent exit, manager Ralf Rangnick decided to not give the England international a brief cameo to say goodbye to his boyhood club.

This decision incensed his brother.

The Man United midfielder’s sibling then attacked the club and its owners.

“No wonder it’s conference league next year. Attacking players for celebrations when the club’s being sold to the super league – ok. Class of 92, Busby Babes? You’re ran by people who don’t even know the offside trap. Classless and the fans need to realise. Goodnight, Godbless! Tarar.

“Been there since 9 years of age and didn’t even get a send-off!! Well done bro your family are proud.”

Why Rangnick left Lingard off the pitch puzzled some fans. He has been a good servant to the club, having risen the ranks at the academy. However, recent news may shed light on the reasoning behind the manager’s decision.

Why was Lingard denied a farewell?

Speculation has spread that the England international is a source of “leaks” about the dysfunctional Man United dressing room. This suspicion arose after comments from United legend Paul Scholes.

Speaking to DAZN, Scholes revealed some inside dressing room info with Jesse Lingard as his source.

“I had a quick chat with Jesse [Lingard] the other day. I’m sure he won’t mind me saying. He said, ‘the dressing room is just a disaster’,” said Scholes as per TALKSPORT.

Ralf Rangnick had to address the comments, saying: “I don’t see that there is an issue with regard to the atmosphere in the locker room.”

Despite this, Scholes’ revelations from Lingard about the dressing room likely did not go down well with players and staff. Did it prevent him from getting his Old Trafford farewell? Only the United manager and squad will know for sure.

Time away from the pitch has not been easy in recent years for Lingard.

The midfielder’s mother has been battling depression for the last few years. As a result, Jesse Lingard stepped up to look after his younger brother and sister to help. Alongside this, the Man United man has his own young daughter to care for too.

In further sad news, the Englishman had to deal with his Grandad suffering from prostate cancer. All this deeply affected him, with Lingard telling BeIN sports that it felt like “the game was passing me by” (quote Daily Mail). However, this hasn’t stopped him from giving his all.

If he leaves in the summer, Lingard will finish with more than 230 appearances for the Red Devils. During that period, he won the Europa League, the FA Cup, and the League Cup, scoring in the finals of the latter two competitions. Fans always have a soft spot for him as a local lad.

Sadly, Lingard did not get the send-off he would have wanted.