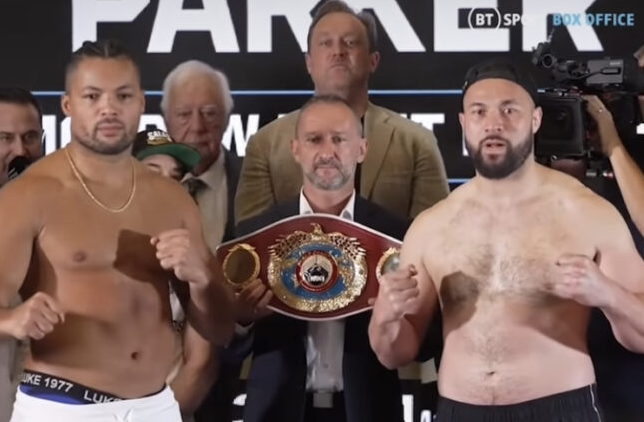 On Saturday night, Joe Joyce vs Joseph Parker goes down at the Manchester Arena – and we’ve got a big pre-fight prediction.

Outside of the ‘big four’, the two men colliding at the weekend stand alone as the most significant threats in the division. The relentless pressure from ‘The Juggernaut’, combined with the speed of the Kiwi, makes this a match-up that fans can’t afford to miss.

Since turning professional, the Brit has smashed through everyone in his path, taking the scalps of Daniel Dubois and Carlos Takam. But his opponent on Saturday night presents a very different challenge. And fans aren’t sure whether he can overcome it.

Therefore, those who haven’t got tickets will ensure they’re gathered around their TV screens to watch the bout play out. So to guarantee you don’t miss any of the action, we’ve got all the details you need below.

What is the Joe Joyce vs Joseph Parker UK start time?

The two men topping the bill will walk to the ring at approximately 10:30pm on Saturday, September 24. However, prior to the main event, there are a plethora of undercard bouts for fans to get their teeth sunk into.

Live coverage begins at 6pm, and will continue for an hour before the PPV portion of the show begins.

How to watch Joe Joyce vs Joseph Parker?

Unfortunately, if boxing enthusiasts want to watch this eagerly anticipated encounter, they’ll have to depart with their hard-earned money. The PPV costs £19.95 on BT Sport Box Office.

But while they won’t want to spend the cash, the standard of the undercard might soften the blow.

What is the Joe Joyce vs Joseph Parker undercard?

Before the big men trade leather, one of the greatest of all time will showcase her skills in the ring. Amanda Serrano has won world titles in seven different weight categories, and on Saturday, she will look to write the latest chapter in her historic career. After falling short against Katie Taylor, the Puerto Rican will jump straight back on the wagon and attempt to unify the division against Sarah Mahfoud.

In addition, with a win over home town favourite Jack Flatley, massive Stoke fan, Nathan Heaney, will move one step closer to his dream of headlining the bet365 Stadium.

Furthermore, there are two more cracking bouts on the bill. Michael Magnesi will defend his IBO strap against Anthony Cacace and Samuel Antwi will challenge Ekow Essuman for the British title.

The term 50/50 gets thrown around on a regular basis in combat sports. But this fight genuinely lives up to that billing. Both men have the qualities to make this a one-sided outing. But which of the two men do we believe wins this one?

Since turning professional, Joyce has developed a reputation for his titanium jaw. No matter what his opponent throws at him, the big man walks forward, absorbs the shots and eventually overwhelms his opponent.

Although some criticise his awkward style and lack of coordination, it hasn’t failed him yet. When he’s stepped up, he’s done the business. Multiple world-level opponents have both fallen foul to his powers of perseverance. However, he’s in very deep water on Saturday.

Parker has reached the pinnacle of the sport and has one major advantage over the home fighter—speed. Outside of Andy Ruiz, the New Zealander possesses the quickest hands in the division and will undoubtedly look to let them go.

From the first bell, expect Parker to nail the taller man with flashy and explosive combinations. This will test Joyce, as while he has dealt with taking punishment, he’s going to get hit with more than he ever has before.

And even if he gets past the first few rounds, he has another problem to deal with. His rival possesses significantly better footwork. The former WBO King can move around the ring like a gazelle, and will happily pepper the bigger man with his lightning jab.

But if the 37-year-old can make it into the second half of the contest, the script could flip. In the past, Parker has lacked the willpower to work at a high pace, while Joyce lives in the fire. No matter what happens, he will keep applying the pressure, and eventually, the Aucklander may succumb to the punches being thrown in his direction.

However, under Andy Lee, Parker has drastically improved his mindset. He looks more determined than ever and willing to push through the pain. However, to beat Joyce, he’ll have to enter completely uncharted ground.

With the Irishman in his corner, the smaller fighter should be able to come through some sticky moments. But with a fighter as resilient as Joyce, you just never know.