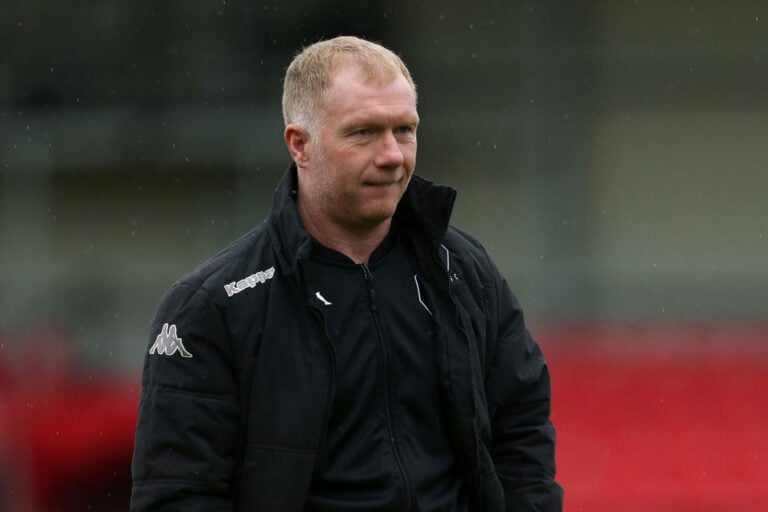 Paul Scholes recently revealed that a certain teammate from his time at Man United was a “disaster” to play alongside.

One of the best midfielders of his generation, Scholes enjoyed perennial success with the Red Devils. He was part of the iconic treble-winning 1998/99 side, and picked up a second Champions League title in 2008.

Paul Scholes was brilliant in his own right, but also had some fantastic midfield teammates during his career. For instance, he and Roy Keane were the heartbeat of United for a number of years. Alternatively, Nicky Butt served as a defensive partner that gave Scholes freedom to get forward.

Later in his playing days, Scholes played alongside the likes of Michael Carrick and Owen Hargreaves in the middle of the park. This trio actually started for the Red Devils in the 2008 Champions League final.

However, not every midfielder meshed with the former England international.

Talking to former Man United teammate Gary Neville on The Overlap, Paul Scholes explained his preferences for a midfield partner.

“It didn’t really matter to me,” said Scholes, via Metro. “I played with Nicky [Butt]. With Roy [Keane] – Michael Carrick. I loved playing with all of them. It wasn’t great playing with people who [were] attacking people, I needed someone who played that [defensive] position really well.”

After hearing his explanation, Gary Neville suggested that Juan Sebastian Veron was not a suitable midfielder to compliment Scholes.

“Yeah, me and Veron were a disaster,” responded the Man United legend. “I think me and Anderson did it once, too. Just, no, it’s not working, is it? Two lads who don’t care about defending, don’t know the defensive position that well.

“But it worked better with a Michael, or a Roy, or a Nicky. They were brilliant playing that position, they knew.

Although his time at Old Trafford did not work out, Juan Sebastian Veron still had a great career.

The Argentina international began his career in his homeland, rising through the ranks at Estudiantes. After a brief stint at Boca Juniors, Veron moved to Europe, joining Sampdoria in 1996.

Then, following the 1998 World Cup, the Argentine moved to an emerging Parma side. Here, Veron established himself as a dominant midfield force as the Italian side won the UEFA Cup and Coppa Italia in the 1998/99 season.

Despite the wildly successful campaign, Veron decided to link up with Sven Goran Eriksson again at Lazio. The pair had previously worked together at Sampdoria. Lazio had to pay a big fee for the midfielder, but he proved his worth as they claimed the 1999/00 Serie A and Coppa Italia.

Following his stint at Lazio, Veron joined Man United in a British record £28.1 million deal in 2001. Sadly, the dynamic midfielder did not adapt too well to the Premier League. His on-pitch struggles, plus repeated desire to return to Italy, ultimately saw United cut their losses and sell Veron to Chelsea.

Chelsea did not keep hold of him for long, however, sending the Argentine out on loan to Inter Milan. Whilst at Inter, Veron picked up another Serie A and Coppa Italia double. But the Italian side decided against a permanent move, so Veron returned home to Estudiantes in 2006.

Back in Argentina, Veron played out his career with his hometown club – winning two Argentine titles and a Copa Libertadores. During the victorious 2008/09 Copa Libertadores run, Veron actually earned the tournament’s most valuable player award.

The Argentine saw out his career at Estudiantes, hanging up his boots with 66 goals and 93 assists in 575 total club appearances.