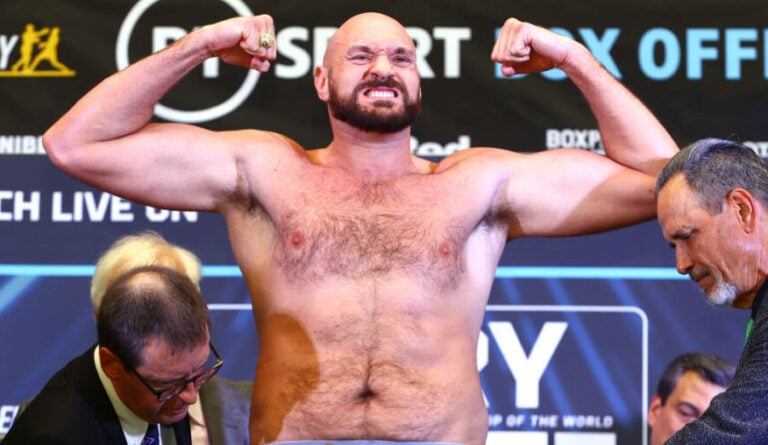 With negotiations for the biggest fight in British boxing not yet complete, Tyson Fury has lost his patience and fired a series of insults at Anthony Joshua and Oleksandr Usyk.

Earlier this month, ‘The Gypsy King’ called his rival out via social media, and AJ quickly responded. He accepted the champion’s terms, and even agreed to a date of December 3 at the Principality Stadium in Cardiff. However, the pair have yet to sign their contracts and it’s riled Fury up.

He’s also furious about what his Ukrainian rival said his on his USYK17 YouTube channel.

The unified champion claimed: “Well, if they sign the fight contract, they will punch each other for a while.

“But the thing is that everyone is expecting Usyk vs Fury for the undisputed championship which for many years hasn’t occurred in the heavyweight division.

“I will support neither of them, I won’t even watch this fight. I don’t want to. Okay, I’m just joking. I will go there to watch live how they will throw punches at each other. Honestly, I don’t think about them at all. Want to know what I’m really thinking about? I want to see my children, to hug and kiss them, that’s all I’m thinking about.”

He added: “Despite his toughness and how he is generally described, he is afraid. Yes, of me.”

This has prompted the 6ft 9in giant to release an explosive response.

In another one of his notorious videos, Fury took aim at both of his rivals – and there were plenty of expletives.

“And of all the s***houses, that big bodybuilder Anthony Joshua – that’s a proper s***house that is. Haven’t signed the contract for I don’t know how long and ain’t signing it. You little sausage.”

Fury continued: “You don’t want to fight, your manager’s a sausage I’ve never seen anything like you. However, I will be fighting on December 3rd if this sausage doesn’t sign the contract, and I don’t think he is [going to].

It’s pretty clear what Fury thinks – and the boxing world is now anticipating the ‘Gypsy King’ taking on one – or both – of his rivals in the near future.