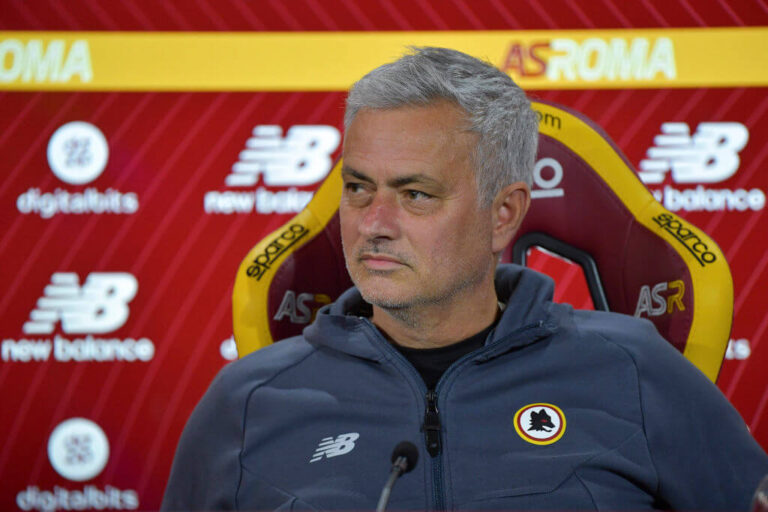 Jose Mourinho has never been far from the main headlines during his time as Roma manager – and this week has been no exception.

The Portuguese came under some pressure during the early days of his Serie A return, with Roma struggling for form. However, the Italian giants have not lost a league game since January 9.

In that time, they have won five games. Their most impressive display came in their last match – a 3-0 victory over fierce rivals Lazio.

The build-up to the game was notable for a typically blunt comment from Mourinho about Lazio’s manager, Maurizio Sarri. When asked about the lack of preparation for his side because of their Europa Conference League game three days before the clash, he replied: “Obviously, I am not happy that we played today with many players who will also have to be there on Sunday, while tonight Lazio are home smoking cigarettes with Sarri.”

But Roma and Jose Mourinho had the last laugh. Tammy Abraham scored twice, whilst Lorenzo Pellegrini netted a stunning free-kick.

After an international break, attention now turns to the remainder of the Serie A season. Before they clash with Sampdoria, Roma sit sixth in the league table. They are eight points off a Champions League place. There are eight league games left in the season.

However, Mourinho was in what you could describe as a relaxed mood before the match – and even shared a not-so-subtle dig at a journalist in attendance.

In his pre-match press conference, Jose Mourinho had plenty to say to journalists asking about Roma. There were even some pre-prepared answers.

But that wasn’t the only notable moment. When asked another question by a journalist in the room, Mourinho had a query of his own in return.

He replied: “I expected a much more aggressive, negative and violent question after listening to you on the radio.

“You are much more aggressive and violent on the radio. But when you come here, you s**t yourself in front of me.”

Mourinho is well-known for his unpredictability in press conferences. There are times when he refuses to speak; other times, he is far more scathing in his responses.

Roma fans will hope that their manager’s spirits are still high when their game against Sampdoria concludes on Sunday.