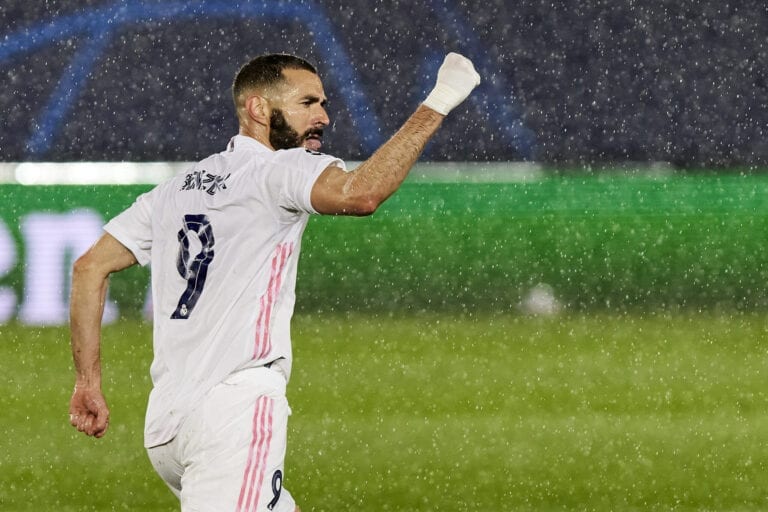 The Frenchman’s 29th minute strike in the first leg of the semi-final tie moved him up to fourth place in the all-time list, tied with Real legend Raul.

It was a typical Benzema strike – he held off two defenders before emphatically firing the ball into the roof of the net from close range.

He is now just two goals behind Bayern Munich striker Robert Lewandowski in the goalscoring charts.

What is most impressive about Benzema’s record is that every goal he has scored in Europe’s premier competition has been from open play. He also has recorded 27 assists.

And he received plenty of praise from fans and pundits after his latest achievement:

However, whilst it was a landmark night for the French forward, Zinedine Zidane’s side conceded an away goal to Chelsea and struggled to match their opponents, particularly in the first half.

Prior to their equalising goal, Real’s only clear cut openings came through Benzema, with Chelsea’s gameplan largely nullifying the dangerous midfield threat of Toni Kroos and Luca Modric.

Benzema began his professional career with Lyon after coming through the youth system.

His first Champions League goal came in a 2-1 group stage victory over Rosenberg in December 2005.

Lyon were powerhouses on the French domestic scene at that time, winning seven Ligue 1 titles in a row between 2002 and 2008.

On the European front, they reached three consecutive Champions League quarter-finals, with Benzema contributing each season.

He scored a total of 12 goals in the competition for Lyon before making the move to Real in 2009.

At the Bernabeu, he has reached new heights.

His best goalscoring season came in 2011/12, when he scored seven goals in 11 European appearances.

Benzema could match or even beat that record this season, having netted six times up to this point.

The second leg of Real’s semi-final tie against Chelsea takes place at Stamford Bridge on May 5.