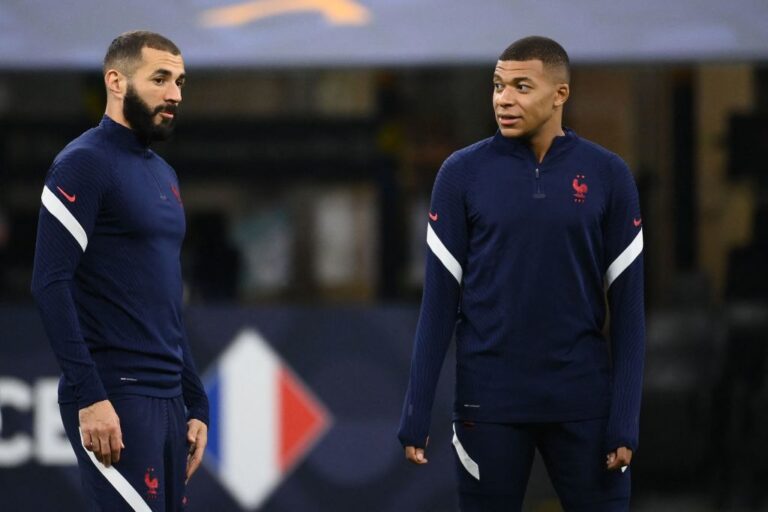 Karim Benzema has finally fielded questions on the decision of his compatriot, Kylian Mbappe, to snub Real Madrid.

Following one of the most high-profile pursuits in football history, Mbappe finally elected to stay at Paris Saint-Germain. He signed a three-year contract, with some eye-watering figures involved. Sky Sports detail that the Frenchman’s new wages come in around the €1 million-per-week mark, with a €100 million signing bonus to sweeten the deal.

Additionally, Mbappe has a plethora of bonuses in the contract. These provide incentives for Ballon D’Or wins, Champions League and team success, as well as goal bonuses. All in all, the three-time Ligue 1 Player of the Year is getting paid a hefty sum to stay at his hometown team.

However, previous reports suggested that the star will have control over transfers, managers, and other club decisions. Mbappe has since addressed these claims, saying that they are not true and that he “will not go above my role of a footballer” (quote The Guardian).

In Spain, the fallout from losing the race for Mbappe has been volatile. La Liga are filing a complaint to UEFA, French financial authorities, and the EU over the decision. They claim that PSG’s massive deal for the player “attacks the economic stability of European football”.

Now, Real Madrid talisman Karim Benzema has broken his silence on the matter.

In an interview before this weekend’s Champions League final, a journalist asked the Madrid forward for his thoughts on the matter.

Benzema refused to be drawn into a conversation on the topic.

“Mbappe? I would say that [Real Madrid] are going to play the Champions League final, and this is not the moment to talk about these little things,” said Benzema, quotes Marca.

“No, I prefer not to talk. I am not angry. I am focused on the Champions League final. It’s more important to do this than listen to other things,” he told Movistar +.

Benzema’s response was diplomatic, likely because he will reunite with Mbappe in the France squad for next month’s Nations League matches. After all, the pair are apparently good friends despite playing for different clubs.

That being said, it must be frustrating to know that your team missed out on signing one of the best players in the world to play alongside you.

But Benzema himself is one of the world’s finest players too.

Real Madrid’s stand-out man has been nothing short of incredible this season. Domestically, Benzema has bagged 27 goals and 12 assists in just 31 starts. His unbelievable goal contribution rate was the key for Los Blancos as they cruised to a 35th La Liga title.

In Europe, Benzema has arguably been the best player in 2021/22. In Madrid’s incredible run to the final, the Frenchman is the Champions League top goalscorer with 15 from 11 matches. Furthermore, the importance of his goals stands out too. For instance, his second-half hat-trick against PSG in the round of 16 turned the tie around.

In the quarter-finals, he did the same again. Another hat-trick, this time against Chelsea, set the tone in the first leg. Then, when Real Madrid were on the brink of collapse in the second leg, Benzema popped up with an extra-time goal to send Los Blancos through.

And who can forget his panenka penalty against Manchester City? Benzema’s unbelievable ability and clutch performance has dragged Madrid to Paris. It will be an all-time great season if he can cap it off with a Champions League title.

Maybe Karim Benzema does not need Kylian Mbappe after all. Surely he would not mind the help, though.