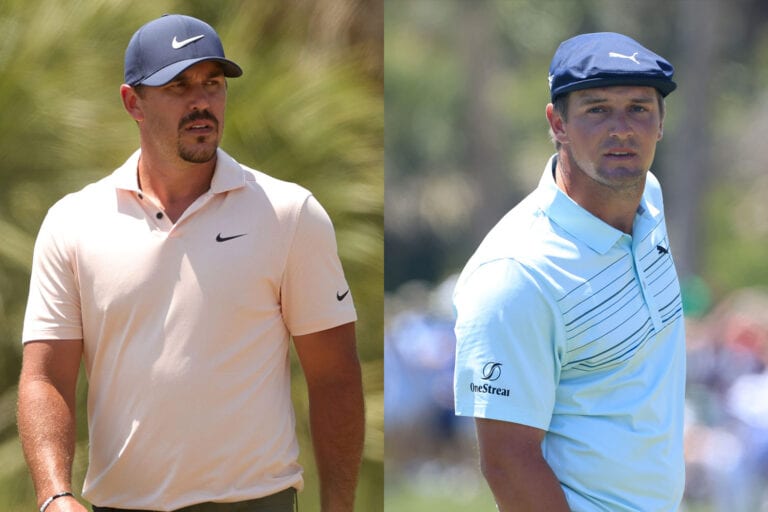 From the outside, feuds may not seem like the sort of thing that creeps into the prestigious sport of golf all that often.

Brooks Koepka and Bryson DeChambeau are a prime example of that being completely untrue.

Their rivalry began to heat up when Koepka complained about DeChambeau’s pace of play back in 2019.

Last year DeChambeau poked fun at Koepka’s physique, bringing up his ‘lack of abs’ during a Twitch stream. His rival responded with a photo of his four major trophies.

You were right @b_dechambeau I am 2 short of a 6 pack! pic.twitter.com/aCJ1jimId6

Things have been quiet for a while between both men, though the Koepka’s feelings became fairly clear in a leaked post-round interview conducted by the Golf Channel during the PGA Championship.

Koepka clearly looks unhappy before the interview even starts, then as he’s talking about his poor putting, DeChambeau wanders into shot, stopping Koepka mid-sentence and sparking a comedically dramatic eye-roll.

It’s tough to tell whether or not DeChambeau says anything, or whether it’s just the sight of him that sets Koepka off.

The disdain he has for Bryson is the best thing going in golf these days. ? pic.twitter.com/1bwMkUx0iy

“Sometimes, um … I lost my train of thought, yeah. Hearing that bulls*t.” He says as Bryson strolls by.

He then mutters “f*cking christ” under his breath, clearly annoyed at something.

Both men are expected to feature in the US Ryder Cup team later this year, which could make for an extremely interesting reunion.