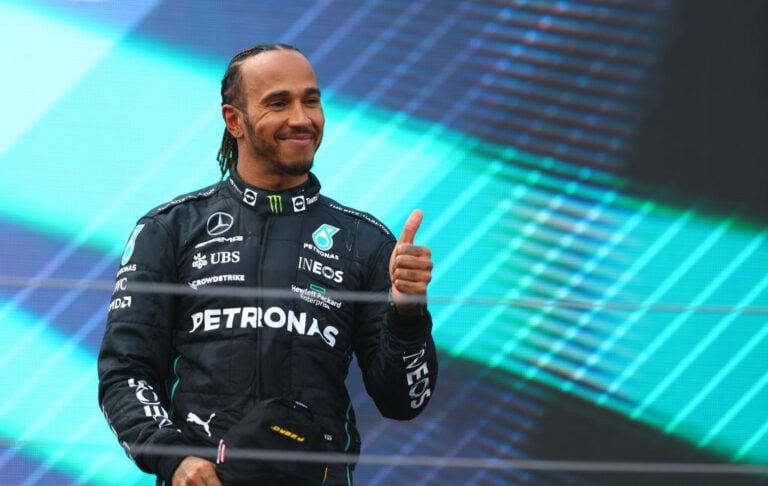 Lewis Hamilton has named his most formidable rival in his F1 career as he prepares for his 300th race at the French Grand Prix.

Hamilton is arguably the greatest driver in F1 history. He is certainly the most successful in terms of numbers. He has won seven Drivers’ Championship titles, narrowly missing out on a record-breaking eighth in controversial fashion at last season’s Abu Dhabi Grand Prix.

Hamilton is also second in the all-time list of youngest world champions (23 years and 300 days), behind Sebastian Vettel.

As he approaches his 300th race in the sport, Hamilton has reflected on his time in F1, and picked out his toughest rival.

Since debuting in 2007, Lewis Hamilton has had many rivals in F1. His second season at McLaren saw him engage in a fierce battle with Ferrari‘s Felipe Massa for the title.

Hamilton won his first F1 crown that season in dramatic circumstances. He overtook Timo Glock on the final corner of the last lap to secure the position he needed to win the title. Just seconds earlier, race winner Massa and the Ferrari garage celebrated, thinking their driver had done enough.

The Brit then spent the next few seasons on the fringes of the title battle, before leaving McLaren for Mercedes at the end of the 2012 season.

In 2014, at the beginning of the turbo hybrid engine era, Hamilton began a fierce rivalry with team-mate Nico Rosberg. After Hamilton won the title in 2014 and 2015, their battle concluded when Rosberg took the Drivers’ Championship in 2016, and promptly retired from the sport.

In subsequent years, Sebastian Vettel would be Hamilton’s most prominent challenger for titles and race wins, with Mercedes team-mate Valtteri Bottas also capable of beating the Brit on his day.

Last season, Hamilton battled Max Verstappen all the way to Abu Dhabi in the battle to become Drivers’ Champion.

However, speaking ahead of the French Grand Prix, Hamilton declined to name any of the above drivers as his toughest rival. Instead, after some intense thought, he gave the accolade to Fernando Alonso.

He explained (quotes via Autosport): “I think it’s difficult to say who has necessarily been the strongest competitor, because every time you’re with someone, you’re in a different place in your life.

“I remember the task of being alongside Fernando Alonso when I was 22 – I was so young mentally. And, of course, OK in terms of skill, but it’s a lot of pressure to go up against a great like Fernando.

“I would say, on pure pace, Fernando [is the toughest]. We had some good battles. I wish we could have more. Hopefully, he will continue to race, so hopefully, we’ll have more in the future.”

When Lewis Hamilton joined McLaren in 2007, he did so at the same time as reigning F1 world champion Alonso.

If fans thought there would be a clear first and second driver at McLaren, however, they were wrong. The rookie driver proved himself to be more than up for the task of battling Alonso.

Hamilton took his debut F1 win in Canada in 2007. After winning the Japanese Grand Prix in monsoon conditions, he led Alonso by 12 points in the standings with two races to go. Back then, it was 10 points for a win, meaning a maximum of 20 points were up for grabs.

However, the season was headlined by Hamilton and Alonso’s intense rivalry. Famously, at the 2007 Hungarian Grand Prix, Alonso blocked his team-mate in the pitlane during qualifying, with the Spaniard securing pole position. He was, unsurprisingly, demoted after the session. There was also the ‘Spygate‘ drama which dominated the campaign.

Alonso left McLaren at the end of the year to return to Renault, and it was a further seven years before he came back to the team. And whilst there has been tension on occasions between himself and Hamilton, much more of an on-track mutual respect has developed between the pair in recent years.

The 40-year-old – who turns 41 next week – currently drives for Alpine. He will become F1’s most experienced driver in terms of races this season.