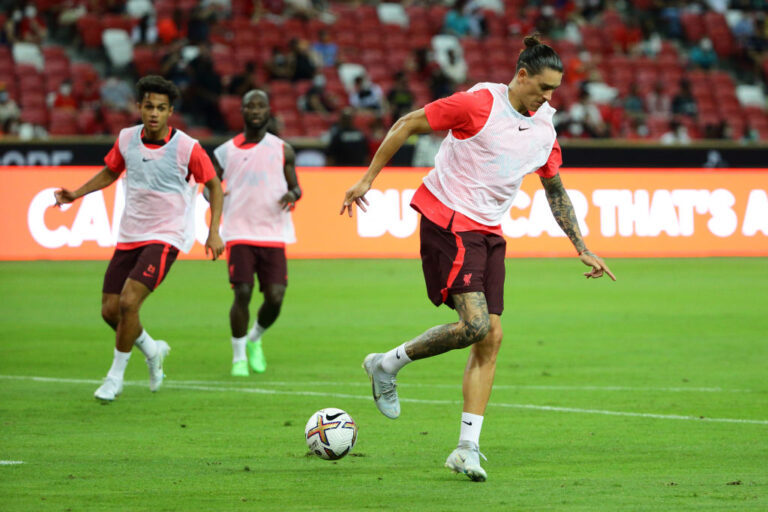 Liverpool manager Jurgen Klopp has spoken out after his new summer signing Darwin Nunez was criticised for his pre-season performances.

Darwin Nunez joined Liverpool in June from Benfica for an initial £64 million, rising to £85 million with add-ons.

The 22-year-old Uruguayan signed a six-year deal at Anfield after emerging as one of the highest-rated talents in world football last year.

Darwin arrived in Liverpool due to the imminent outgoings of Sadio Mane to Bayern Munich and Divock Origi to AC Milan.

The striker took Origi’s number 27 shirt when he signed at the Merseyside club.

Darwin got his first minutes for his new club on Tuesday. The striker came off the bench in Liverpool’s 4-0 defeat to Manchester United in Bangkok.

The Uruguayan failed to impress, as did most of Liverpool’s team. In just under 30 minutes of action, the 22-year-old didn’t threaten, and he appeared to struggle with the pace of the match.

While this fixture was Liverpool’s first of pre-season, that didn’t stop fans from criticising the striker. Man United fans in particular seemed to revel in the Uruguayan’s struggles against their side.

Some supporters joked that Benfica ‘scammed’ Liverpool with the huge fee involved in the transfer.

Others compared the striker to Romelu Lukaku, who was often criticised when he had a heavy first touch. Lukaku’s struggles at Chelsea last season were well documented, and some have even predicted that Darwin will have a similar experience at Liverpool.

Following the critique of Darwin, Liverpool boss Jurgen Klopp spoke out. The German labelled the comments as “a joke” and told his players to pay no attention to such words.

He said: “It’s kind of a game or a joke for some people to pick out some situations where a player’s not doing well. That’s only a game from [fans of] other clubs, which is normal. Our fans probably do the same with signings of Manchester United. We cannot take this seriously.”

Darwin got more pre-season minutes in Liverpool’s 2-0 win over Crystal Palace on Friday. Reds supporters will hope the attacker can build up his fitness in order to hit the ground running in the Premier League this term.