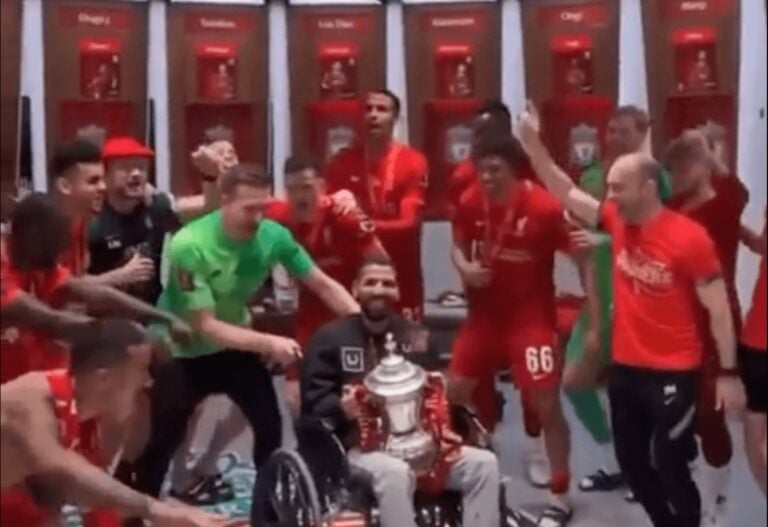 Liverpool emerged triumphant in the FA Cup on Saturday via an engaging penalty shootout. What happened afterwards made for an exceptionally heartwarming moment.

In a fantastic collision, the Reds battled Chelsea for one of the biggest prizes in the sport. In a heart-racing affair, the two teams traded almost 30 efforts at goal.

However, despite the constant opportunities, neither team could find a way to break the deadlock. Therefore, the nailbiting fixture went to spot-kicks.

After an early miss from Cesar Azplicueta, Sadio Mane had the opportunity to bring the trophy back to Merseyside. But despite his usual calmness under pressure, on this occasion, he failed to convert.

His miss left Liverpool supporters with their heads in their hands. However, they quickly had something to cheer about after Alisson denied Mason Mount.

They watched with their hands over their eyes as Kostas Tsimikas stepped up to the mark. The Greek left-back wrote his name into the history books to their delight. The crowd then descended into raptures, and hopes of a quadruple remain very much on the table.

The FA Cup is their second piece of silverware this season, after winning the Carabao Cup earlier in the year. They currently stand in second place in the Premier League, and with a Champions League final coming up against Real Madrid, you can’t blame them for dreaming.

Liverpool players created a heartwarming memory for one man in the post-match celebrations.

As to be expected, it was going off in one half of the Wembley changing rooms. The entire Liverpool squad came together to celebrate their success. And in a moment that showcased Mohamed Salah‘s character, he welcomed in his old international teammate Moamen Zakaria.

The player, who made 12 appearances for Egypt, has amyotrophic lateral sclerosis (ALS), which is a form of motor neurone disease. MND is a progressive disease that involves degeneration of the motor neurons and wasting of the muscles.

Footage has emerged, via Reddit user u/RevertBackwards, which shows Zakaria sharing the moment with the Liverpool players. He can be seen holding the trophy and getting wheeled around the dressing room by Salah’s teammates.

It was, therefore, a wonderful end to a memorable day for Liverpool players, officials and supporters.

James Milner asks that Van Dijk be rotated at Liverpool

Donnarumma explains why he did not celebrate after Saka penalty miss