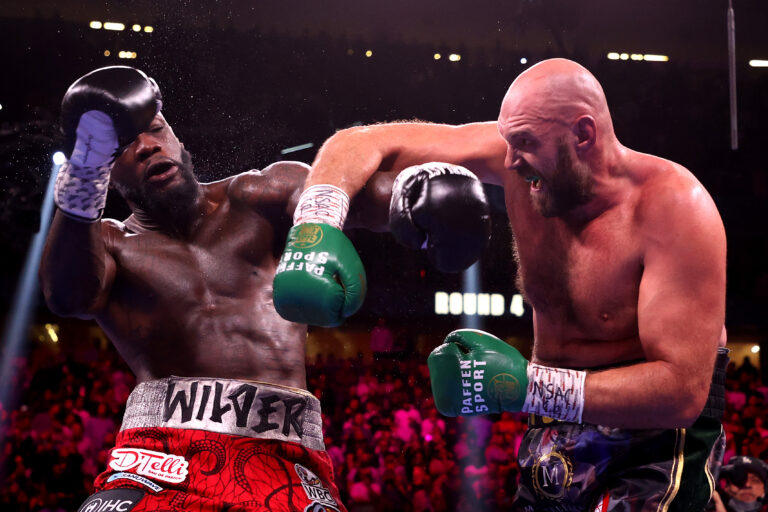 Deontay Wilder broke his hand during the trilogy fight against Tyson Fury on Saturday evening, his trainer Malik Scott has claimed.

Fury knocked out the ‘Bronze Bomber’ in round 11 of their bout to retain his WBC, The Ring and lineal heavyweight titles.

Wilder was knocked down in round three, before responding by flooring Fury twice in round four.

The ‘Gypsy King’ was up on two of the three judges’ scorecards in each of rounds six to 10. He then landed the fight-ending blow that sent Wilder crashing to the canvas in the penultimate round.

Fury called the bout a “great fight” afterwards, before serenading the Las Vegas crowd with the classic 90’s hit ‘Walking In Memphis’ – with the word ‘Vegas’ substituted in.

Wilder, meanwhile, was sent to hospital after the fight for precautionary checks. Scott – who became the American’s trainer ahead of the trilogy bout – has reeled off a list of injuries that his fighter suffered during the bout against Fury.

He told ESNews: “I took him up into his room, he’s seen a doctor afterwards.”

“Everything’s cool… he busted his lip, he broke his hand, broke his figner, knuckle, something like that. But life goes on.”

Speaking after the fight, Wilder admitted: “I did my best, but it wasn’t good enough tonight. I don’t know what happened.”

“I know that in training he did certain things, and I also knew that he didn’t come in at 277 pounds to be a ballet dancer. He came to lean on me, try to rough me up and he succeeded.”

Fury now has multiple options as to the identity of his next opponent. He has 30 days to agree to a unification bout against Oleksandr Usyk, although Usyk will be taking on Anthony Joshua in a rematch likely to take place in “early spring” of next year, according to Eddie Hearn.

Wilder’s next steps are less clear – could he himself potentially take on Joshua next year?