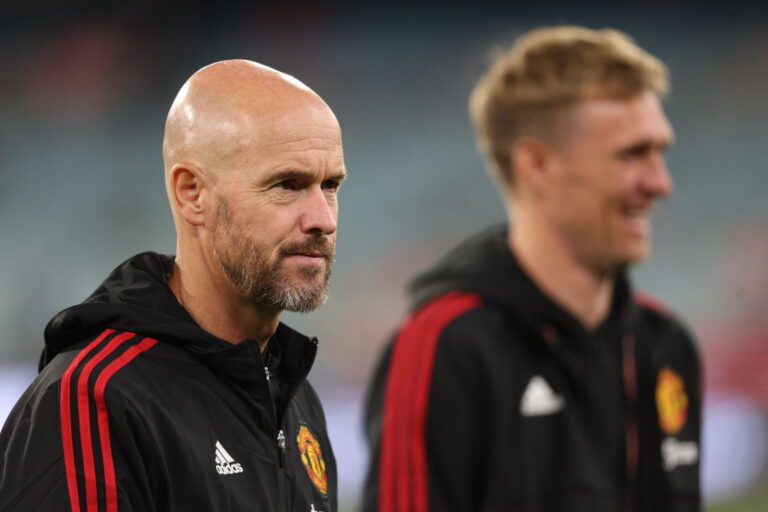 Man United have launched their new 22/23 Adidas away kit, going for another retro look.

Their home kit was launched last week, and it garnered much praise. Their new away kit is no different.

A host of United players donned the new kit in promotional pictures and videos, from first-teamers Anthony Elanga and Scott McTominay, to United Women’s Hannah Blundell and Leah Galton.

The beauty is in the details

United’s new away kit is stunning. The white base allows the black and red detailing to pop, resulting in an incredibly classy look.

The sponsors TeamViewer and DXC Technology are also in black, contrasting with the base.

The badge, sitting proudly on the left side of the chest, is surrounded by that same shield shape we saw on the 22/23 home kit. But this time is coloured in black.

What’s really cool with this kit is the way the black, red and white work together in tandem.

The iconic three Adidas shoulder stripes have a modern look, with two red stripes flanking a black one.

The black collar and the sleeve cuffs both don the same red and white dashes, adding another retro element that reminds Reds’ supporters of their other great white kits.

How does it compare to its predecessors?

United have had some great away kits in the past.

The AIG sponsor was also black, continuing the similarities with this year’s offering. While the 06/07 kit featured gold accents on the collar and sleeves, the badge looked remarkably similar to the 22/23 top.

Like this year, the United crest was encased in a shield-like shape, and the background was coloured black.

In comparison, the 98/99 shirt features the same shaping and black background on the badge but is heavier on the use of black than in 06/07.

This strip featured a black collar and more black accents on the body and shorts. Not only that, but the famous SHARP sponsor stands out brilliantly in red.

Worn during the treble-winning 98/99 season, this kit will be remembered for its look and its history.

Man United have had some brilliant white kits in the past. Years down the line, Reds fans will certainly remember the 22/23 shirt. It’s a beauty.