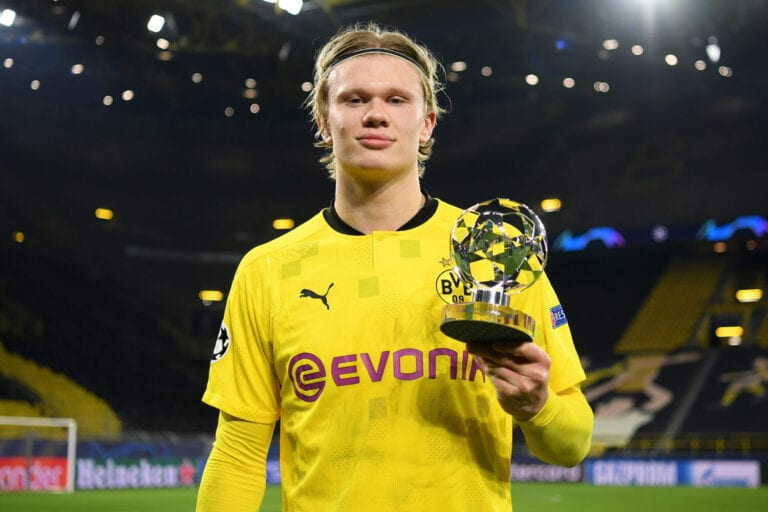 Erling Haaland‘s brace in Borussia Dortmund’s 2-2 draw with Sevilla in the Champions League on Tuesday once again underlined the world-class quality that the Norwegian forward possesses.

The Borussia Dortmund striker now has an incredible 20 goals in 14 Champions League appearances.

And despite a late Sevilla comeback, Haaland’s latest strikes were enough to send Dortmund through to the quarter-finals 5-4 on aggregate.

His first goal was a close-range sidefooted finish from Marco Reus’s cutback on 34 minutes.

He then scored a second on 48 minutes from a tight angle, but the goal was ruled out for a foul on Sevilla midfielder Fernando.

VAR then retrospectively awarded a penalty to Dortmund for an earlier foul, which Haaland missed. However, after a retake for a goalkeeper infringement, the Norwegian did eventually add to his tally for the night.

Speculation is currently rife in terms of Haaland’s future, with several top clubs believed to be interested in acquiring his services.

The 20-year-old has a reported release clause of £65 million in his Dortmund contract, but that does not become active until 2022.

Who is currently leading the race to be Haaland’s next club? All odds below are courtesy of Oddschanger.

Pep Guardiola’s men are currently listed as the favourites to sign Haaland, with the future of Sergio Aguero currently uncertain.

The Argentinian has made just 11 appearances in all competitions for City this season, scoring twice.

Guardiola said that a contract decision would be made based on his future performances.

Haaland’s father Alf-Inge played for City between 2000 and 2003 before retiring due to a left knee injury.

Manchester United have been heavily linked with Haaland over recent transfer windows, with manager Ole Gunnar Solskjaer a known admirer of the striker.

With the Red Devils’ counter-attacking style, the Norwegian would perhaps be a better fit at Old Trafford than at City.

His pace and strength are two of his key attributes, which would suit United’s approach particularly against the top sides.

With Juventus boss Andrea Pirlo building a younger squad this season, Haaland could be the perfect partner for Cristiano Ronaldo up front.

The Old Lady are struggling to retain their Serie A crown this season, sitting 10 points behind leaders Inter. However, with a few key additions, they could be more firmly in the mix next season.

Is Haaland the man to help them do that?

Real Madrid seem to have eased off on their ‘Galacticos’ transfer policy in recent years.

However, it is no secret that they are now looking to boost their attack line-up. PSG forward Kylian Mbappe has been a long-term rumoured target.

But given the club’s financial situation caused by the Covid-19 pandemic, Real may be put off a move for either Mbappe or Haaland in the near future.