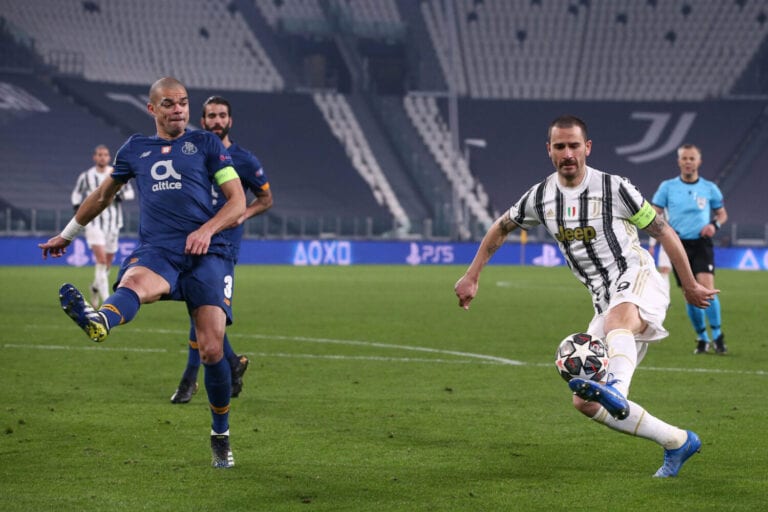 Porto defender Pepe rolled back the years during his side’s 4-4 away goals victory over Juventus in the Champions League last 16 on Tuesday.

The moment of the game that will be most famously remembered came in the 124th minute of extra-time.

In search of a winning goal, Juve defender Merih Demiral headed the ball over the top of the Porto defence and into the path of the onrushing Matthijs de Ligt, who was gearing for a shot at goal.

But 38-year-old Pepe had other ideas. One of the best defenders in the world at reading the game over the years, the Portuguese international watched the ball carefully and cleared it with a bicycle kick.

Moments later, the final whistle was blown. Porto had lost 3-2 on the night, but progressed to the quarter-finals on away goals.

Stoppage time after 120 minutes, down to 10 men, seconds from the Champions League quarter-finals…

What a flying clearance from Pepe at the age of 38! ? pic.twitter.com/Cbe8DFBSDH

Pepe’s clearance typified the gutsy performance that Porto had put in on the night. 2-1 up on aggregate from the first leg, they opened the scoring on 19 minutes through Sergio Oliveira.

Federico Chiesa then scored twice in the second half for Juventus to restore parity in the tie.

Inbetween the two strikes, Medhi Taremi was awarded two yellow cards inside two minutes to leave the visitors a man down.

But Porto battled hard to take the game to extra time. They then took an unlikely aggregate lead when Oliveira’s free kick went underneath the wall and into the bottom corner.

Adrien Rabiot’s 117th-minute header created a nervy conclusion to the game for Sergio Conceicao’s side. Marshalled by Pepe, however, they held on for a famous victory on away goals.

He pointed out Pepe’s defending of his box as a key attribute to learn from.

Ferdinand explained: “If I am coaching at a football club now, I’d get these clips, and give them to every young centre half at the club to watch, in terms of positional, desire, communication, awareness, sensing and smelling danger of where to be and using your body, as well as in terms of defending the box.

"If I'm coaching at a football club now I'd get all these clips and give them to every young centre-half at the club."

A reminder this man is 38! ? @GaryLineker, @rioferdy5 and Joe Cole couldn't get enough of Pepe this evening! A true warrior ? pic.twitter.com/jxxbEVdtES

“What we normally see with young defenders nowadays is are they good on the ball, but how about defending your box?

“And far too often we see these young defenders, and defenders of maturity still in the game today, they get their feet muddled up, their body positions are wrong.

“That was an almost perfect performance in terms of defending your box and that is something that should be sent around to all the young centre-halves.”

Joe Cole, in the studio alongside Ferdinand, was equally as impressed. He referred to the Portuguese as “the most annoying player in world football over the last 20 years” to play against.

Pepe joined Porto in 2019 after leaving Turkish side Besiktas. He made over 200 appearances for Real Madrid over a 10-year spell.

Despite being at the age of 38, last night’s performance suggests he’s still got plenty of football left in him.

The draw for the Champions League quarter-finals takes place on Friday, March 19.