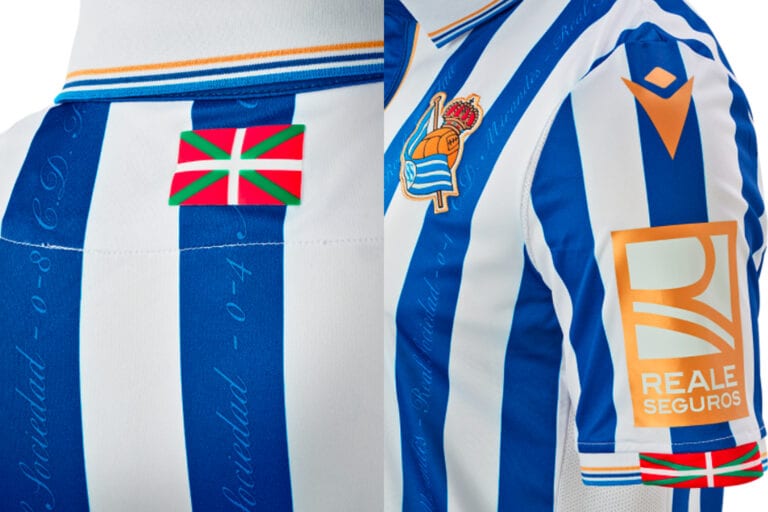 Sociedad, who continue to thrive in this season’s LaLiga, will face Athletic Bilbao in the final on April 3. The rescheduled date stems back to last season’s competition with the original plan being to play the game in August 2020.

Alas, like many other things, COVID scuppered those plans.

As a result of that the game was pushed back to next month which, ironically enough, will come just two weeks before the 2021 final – which will also include Bilbao.

It’s a pretty crazy situation but among all that, Sociedad have unveiled a quite stunning special edition shirt which they will don on April 3.

If they secure the win it’ll be just their third Copa del Rey trophy and first since 1987.

“In addition to the classic txuri urdin, the shirt has details in gold. Four blue stripes on the chest and three on the back, interspersed with the characteristic white stripes, symbolize the path that has led us to the final. Seven encounters, seven memories.” The club website reads.

“Each of these blue stripes bears one of the milestones of this itinerary. One by one we watch the matches in which we enjoyed so much, achieving qualification to play the historic final on April 3 at La Cartuja: CD Becerril, AD Ceuta FC, RCD Espanyol, CA Osasuna, Real Madrid CF and CD Mirandés (eliminatory double encounter).”

The final still isn’t going down in the manner they would’ve hoped but even so, this is a big moment. The club has been through a string of ups and downs over the years and silverware is finally within touching distance.

These are unconventional times and nobody can get away from that. Still, if Sociedad can pull this off, you can bet fans San Sebastián will find their ways to celebrate.