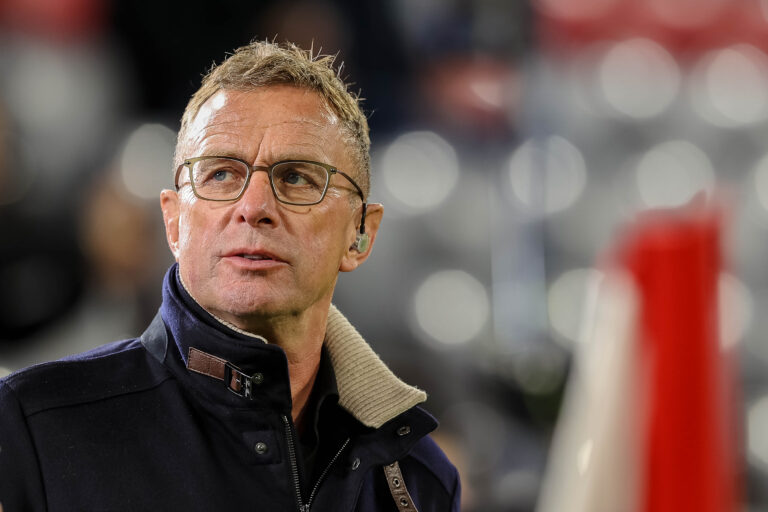 Manchester United have agreed to appoint Ralf Rangnick as their new interim manager, according to reports. As of yet, the deal is yet to be finalised.

The Athletic have reported that the club have agreed on a deal with the German coach to replace Ole Gunnar Solskjaer. However, work permit processes mean he can’t take charge for United‘s clash against Chelsea on Sunday. Michael Carrick will once again take temporary control.

The same report also states that Rangnick has agreed to take over on a six-month contract. At the end of that spell, he will take up a two-year deal in a consultancy role.

United do need to reach an agreement with Rangnick’s current club Lokomotiv Moscow to release him from his contract.

The Red Devils sacked Solskjaer last Sunday after a series of poor results. The Norwegian’s final game in charge was a 4-1 defeat to Watford the day prior.

United have also suffered 5-0 and 2-0 defeats to Liverpool and Manchester City respectively this season. They currently sit eighth in the Premier League table. They are 12 points behind leaders Chelsea.

Let’s look at who United’s new interim boss is and whether there have been other contenders for the role.

Who is Ralf Rangnick?

Ralf Rangnick is a German coach who has over 35 years of experience in various management roles.

Rangnick guided the club to promotion to the Bundesliga in 2016 before being replaced by Ralph Hasenhuttl. When the Austrian left the club two years later, Rangnick returned for a second stint as manager.

In 2012, he became director of football for RB Leipzig and RB Salzburg before a spell as head of sport and development at the Red Bull Group. He was appointed as the Manager of Sports and Development for Lokomotiv Moscow earlier this year.

According to The Athletic, Rangnick has previously met Manchester United’s director of football, John Murtough. The report states that the German hosted Murtough for eight hours and showed him around the Red Bull football group’s facilities in 2019.

Read: This Ralf Rangnick interview shows why Man United fans want him to take over.

As per Manchester Evening News, Murtough has led the search for United’s new manager, and the pair will have had further discussions over the last week. This time around, the Red Devils look to be appointing the highly-successful German manager.

Were there other contenders for the role?

Yes. As you would expect, Manchester United are linked with plenty of big managerial names. It was never going to happen any other way.

According to multiple sources, Rudi Garcia and Ernesto Valverde have both interviewed for the position of interim manager. Meanwhile, the Daily Mail reported that former United defender Steve Bruce was “offered” to the club as an option by his agent.

There have also been reports surrounding the possible appointment of Paris Saint-Germain boss Mauricio Pochettino. Manchester Evening News reported that PSG did reject an initial approach from United for their head coach.

With Rangnick looking set to take the club forward, at least in the interim, United players, officials and fans will no doubt welcome some stability after what has been a tumultuous last few weeks.