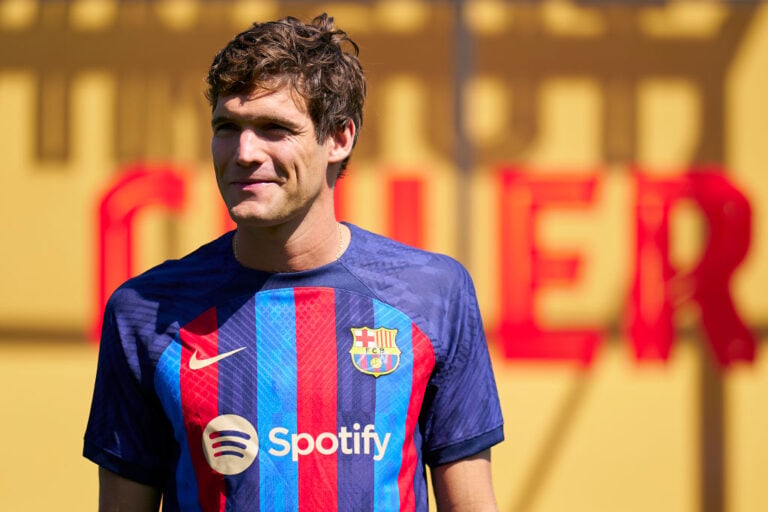 Former Chelsea defender Marcos Alonso has detailed his parents’ humorous reaction when Real Madrid asked him to join their academy as a youngster.

The current Barcelona player revealed this and other career details in a recent interview with Spanish news outlet SPORT.

Despite his father, Marcos Alonso Sr, playing for Barcelona over 180 times in his career, Marcos Jr actually started at Real Madrid. This was obviously tricky, being a childhood Barca fan.

“It was complicated at first,” said Alonso about being in Real’s youth system. “After doing the trial a little reluctantly, they [Madrid] called me to join. My parents were laughing.”

However, Alonso and his family were not alien to Los Blancos. After all, he does have Real Madrid blood as well as Barcelona; Alonso’s grandfather, Marquitos, was part of the legendary Real sides of the 1950s.

And Marcos Alonso explained that rising through the ranks in Madrid did help his career.

“In the end, Real was the best for my development,” added the Barcelona defender. “I was there for many years. I grew as a person and a player – I can’t say I didn’t.”

During the interview, Alonso also gave an explanation to other choices in his career path. This included the reasons behind his decision to leave Chelsea last summer.

The Spaniard joined the Blues on a five-year deal in 2016. Per Sky Sports, Alonso cost Chelsea £24 million.

Although he worked with multiple managers whilst at Stamford Bridge, the defender’s time at Chelsea was a successful one. He won the Premier League in his first season with the club, before adding an FA Cup the year after.

In addition, Alonso won the 2019 Europa League, the 2021 Champions League, and the 2022 Club World Cup whilst in a Blues shirt. It was a truly trophy-laden period in his career.

But Alonso still decided to move on from London in the summer of 2022, joining Barcelona on a free transfer. He detailed what motivated his move during his talk with SPORT.

“If, at any moment in my career, you had asked me who I wanted to play for, I would always have said Barca,” said Alonso. “Like my dad. Maybe it was a risky decision coming here, to leave my comfort zone at Chelsea. But it’s a nice project and I was attracted by the prospect of coming back to Spain before the end of my career.”

The Barca defender currently only has a one-year deal with the club. Alonso would be open to staying longer, though, adding that he is “really happy” in Barcelona.

On the pitch, Marcos Alonso has had a steep learning curve at his new club. Due to an injury pileup, Xavi is utilising the left-back at centre-back – a position that Alonso is not familiar to.

For a player who is more renowned for his attacking potential from the full-back spot, this may not suit his strengths, either.

Alonso has played 11 times for Barcelona so far this season, with seven of those appearances at centre-back. In contrast to what you might expect, the Spaniard has fitted into the unfamiliar role well.

He has kept three clean sheets in five starts at centre-back. The defender even added a goal from this position during Barca’s 4-2 win over Viktoria Plzen.

With this versatility in the back four on show, Marcos Alonso may fight his way into Luis Enrique’s squad for the World Cup.