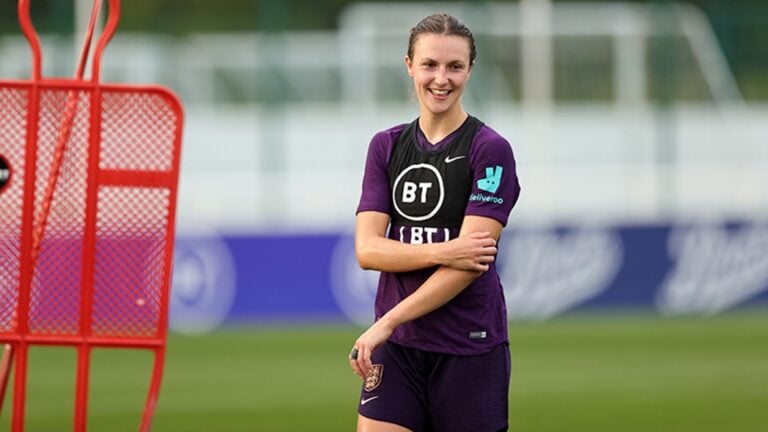 Wubben-Moy, who was part of Sarina Wiegman’s winning England Euro squad, has said that her values “aren’t reflected” by tournament host country Qatar.

About her decision to boycott the men’s World Cup, Wubben-Moy told The Guardian, “It’s tough. As an England team, we all have strong values. A lot of those values aren’t reflected in the way that we see it in Qatar.”

However, despite taking a stance against the forthcoming men’s World Cup, Wubben-Moy says she will still be rooting for England.

“I will be supporting the men’s team, but I won’t be watching. It’s hard to talk about but at the end of the day, we’re one team here at England and we know that they have an opportunity to play at a World Cup.

“A lot of the players might not ever play in a World Cup again, so I can’t comment on them choosing to go because many people would take that same choice. But [if] they can use this opportunity to help bring about change, I think that’s important.”

Ahead of the tournament, Qatar has stated that “everyone is welcome” to visit the country. However, homosexuality still remains illegal.

He also stated that the Qatar government will not change its laws on homosexuality during the 2022 men’s World Cup.

“Sport is a very strong vehicle for change,” says Wubben-Moy. “To underestimate that would be naive. I’ve seen a lot of the players have strong viewpoints and I salute them, and I wish them the best in looking to express that throughout this World Cup.”

Elsewhere, more England players have also been vocal regarding their opinions on the Qatar 2022 World Cup.

According to The Guardian, Manchester City defender Alex Greenwood said, “We obviously can’t choose where the World Cup is happening.”

“We have to try to change the negative into a positive and speak about the things that we can maybe highlight and what we believe in as a country and that’s for all women to have equal rights,” she continued. “That’s something we’ll talk about openly and I’m sure the men will do the same.”

Appearing on Radio 4’s Woman’s Hour, Wubben-Moy’s Arsenal teammate and fellow England Lioness Beth Mead said that the Qatar World Cup, “is not something that I’ll be backing or promoting at all,”

“It’s disappointing in the sense that there’s no respect on a lot of levels, even though it’s a game of football,” said Mead.

She also echoed Wubben-Moy’s sentiments by saying, “I’m cheering for the boys who are going to play football there [but] from the minute it was announced I thought it wasn’t the best idea.”

The England 2022 World Cup squad will be named this week

On Thursday, Gareth Southgate is set to announce the men’s squad he will be taking to Qatar.

In less than two weeks, the chosen England team will face Iran in the group stages. The following matches will be against Wales and the USA before hopefully heading into the knockouts.

It has also already been reported that during the tournament, England captain Harry Kane will be wearing a OneLove armband. This is in support of Qatar’s anti-LGBTQ+ laws.