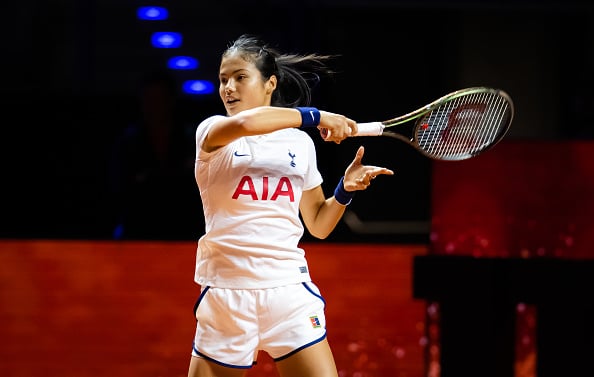 According to The Athletic, Raducanu has had “several conversations” with Kane over the last few weeks. These chats have reportedly consisted of Kane, 29, giving the 19-year-old tennis player tips on dealing with public scrutiny as well as ideating for success.

Emma Raducanu has publicly praised Harry Kane more than once

While this collaboration wasn’t on our 2022 bingo card, Raducanu has actually discussed her admiration for Kane on a couple of occasions already.

In April, the tennis player posted an image of her training in a Tottenham shirt to Instagram.

According to WTA Tennis, Raducanu said, “My whole team basically are big Spurs fans and I feel like they’re egging me on.

“They’re desperately trying to get me behind them. I don’t necessarily follow football so much, but I feel like now because of them I’m feeling some sort of connection.

“I loved following the Euros last year and watching Harry Kane, who’s obviously the England captain, and Son [Heung-min], I’m a big fan of him as well. So yeah, I like to dabble.”

Following this, Raducanu also told the Women’s Tennis Association in June that one of her “favourite footballers is probably Harry Kane because he is captain of England and he is such a great role model to follow.”

“He is super professional and takes everything to the nth degree. I definitely feel I can learn from that.”

The tennis star has had a mixed season

Since she burst on the scene with her 2021 US Open win, Raducanu has found herself under intense public pressure. In the last 14 months, her results have been mixed, with 17-19 wins and losses.

Emma Raducanu is currently looking for another tennis coach

Earlier this month, the grand slam champion’s most recent coach, Dmitry Tursunov decided he could no longer work with her. According to tennismajors.com, this was because there were “red flags” that couldn’t be ignored.

Tursunov’s departure marks the fourth coach to leave her side in less than two years.

It’s therefore assumed that Kane’s advice will serve as temporary guidance while Raducanu searches for another permanent mentor.

As of October 31, she currently sits at 76th in the world rankings. Her current career high is 10th.