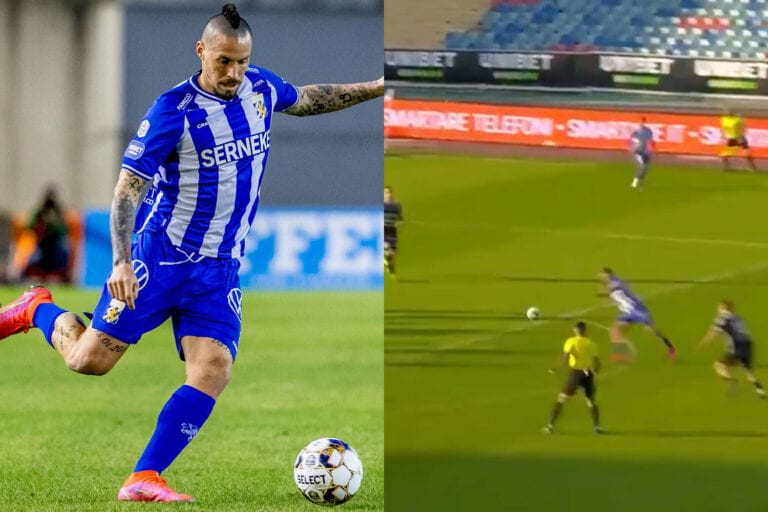 Marek Hamsik scored his first goal in Sweden yesterday – and it was some strike.

The former Napoli midfielder signed for Allsvenskan side IFK Goteborg in March on a deal that lasts until August, having left Dalian Professional in China.

And in his sixth appearance, he produced a magical moment.

With Goteborg drawing 1-1 at home to IK Sirius, the hosts won a corner on 51 minutes.

It was headed clear by the defence, but only as far as Hamsik, who was positioned just outside the area.

The Slovakian international hit a peach of a strike on the half volley which whistled into the back of the net and left the goalkeeper with no chance.

Unfortunately for Hamsik and Goteborg, they could not hold on for victory, with Sirius making it 2-2 on 65 minutes.

For the spectators in the ground, though, it was another reminder of Hamsik’s goalscoring abilities.

He scored exactly 100 Serie A goals during his nearly 12-year spell with Napoli, becoming the club’s all-time leading goalscorer in the process (he has since been overtaken by Dries Mertens).

The 33-year-old hadn’t featured in the Chinese Super League since September, but did play for the Slovakia national team in their successful Euro 2020 play-off against Northern Ireland.

The move to Goteborg will therefore allow Hamsik to build up his match fitness ahead of the tournament.

Upon signing, he said: “I am very happy to be here and am positively surprised by the great training opportunties that exist here.

“As everyone knows, I am here on a short-term contract but I will do my utmost to help the team achieve success. Now I put my whole body and soul into this club.”