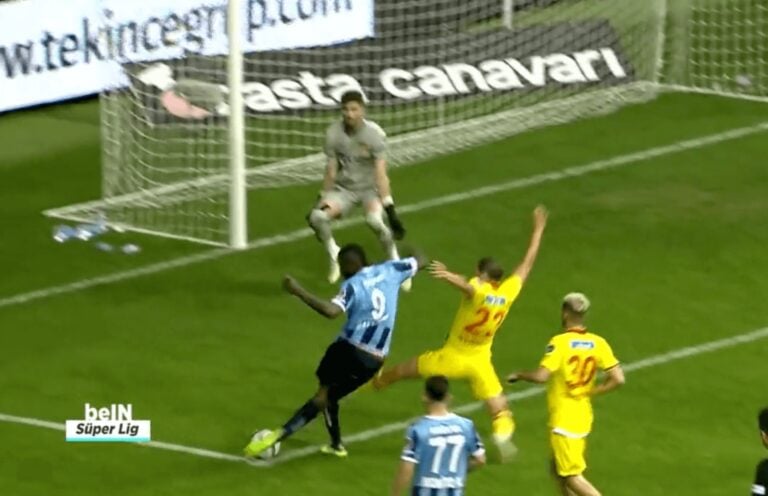 On the day that two of his former clubs secured league titles, Mario Balotelli also made headlines in the Turkish Super Lig. The Italian forward scored five goals for Adana Demirspor in their 7-0 victory over Goztepe. The fifth was particularly special.

With the home side six goals up midway through the second half, Balotelli received the ball outside the opposition box. He dribbled toward jockeying defenders while performing stepovers before finishing with a rabona. The goal ranks as one of Balotelli’s greatest.

Balotelli, now 31, has a history of spectacular goals. However, this strike didn’t bring any of them to mind, but rather one of his lowest moments, which came in a City shirt.

Ahead of the 2011-12 campaign, City went on a pre-season tour of North America. During that time, they faced LA Galaxy in a friendly in California. Balotelli opened the scoring in the 20th minute and had the chance to double the visitors’ lead a few minutes later.

However, instead of trying to slot the ball past the goalkeeper, Balotelli lazily tried a spinning trick shot. Perhaps the reaction would have been different if it had gone in. Instead, the ball dragged wide, and the crowd unanimously booed the forward. The commentators were equally annoyed by Balotelli’s disrespectful actions and praised Roberto Mancini for immediately substituting the attacker.

Balotelli’s potential was clear for all to see during those early City days. So was his bad attitude, though. He regularly clashed with Mancini, with the pair having a love-hate relationship more akin to a father and unruly son than a coach and player.

Although Balotelli didn’t fulfil his massive potential, he went on to score 17 times in that campaign, and he provided the assist for the famous Aguero goal that secured the title.

A good season in Turkey

Balotelli’s rabona goal capped off a successful individual season with Adana. The club finished ninth in the table. Balotelli scored 18 league goals, finishing second in the race for the golden boot, two goals behind Umot Bozok of Kasimpasa.