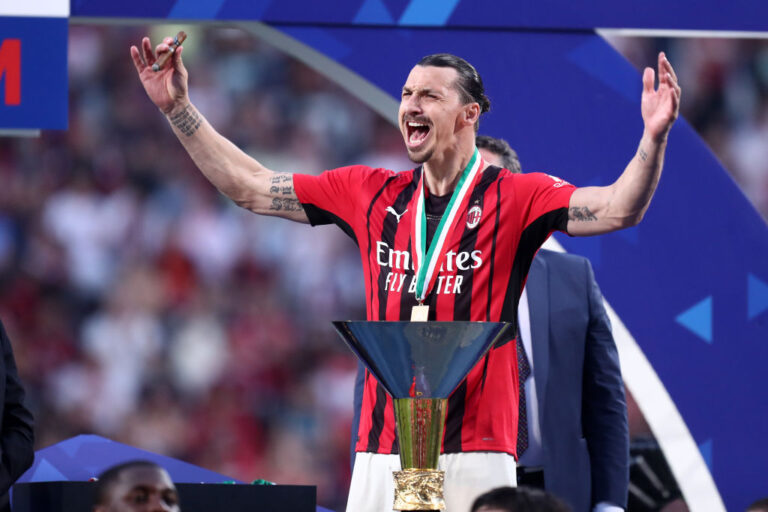 Zlatan Ibrahimovic could not help but troll Hakan Calhanoglu during AC Milan’s title celebrations, asking fans to send a message to the Inter player.

An intense battle for the Serie A crown came down to last weekend’s final day. City rivals AC and Inter Milan were going head-to-head for the Scudetto. The Rossoneri were in the driver’s seat; they just needed to match Inter’s result in order to win the league.

Meanwhile, Inter needed a victory and for Sassuolo to beat Milan to claim their second league title in a row.

Unfortunately for the Nerazzurri, it was not to be. AC Milan scored three first-half goals on their away trip to Sassuolo, securing a comfortable victory and the Serie A title. It is the red side of Milan’s first Scudetto for 11 years – made sweeter by vanquishing their bitter rivals.

Unsurprisingly, Stefano Pioli’s men had wild celebrations, led by 40-year-old Zlatan Ibrahimovic. The Swede, never afraid to share exactly what’s on his mind, used Milan’s bus tour to get a message out to a rival player.

Weaving through the packed Milan streets on the open top bus, Zlatan brandished a microphone to speak to the masses. He asked the Rossoneri fans to deliver a vengeful message to a former player.

The forward then asked the crowd to repeat the message louder, as he could not hear the first time. They duly obliged.

Inter midfielder Calhanoglu made himself a likely target for trolling following his controversial move from one side of Milan to the other.

The Turkish international shocked fans when he signed for Internazionale following the expiry of his AC Milan deal in 2021. Although not the first player to switch sides, Calhanoglu burned bridges with Milan via his comments following the move.

According to Goal, the midfielder said that he left for Inter because he “wanted to win something in Italy”. In addition, Calhanoglu wanted to join Inter as they are “a great team” who “often beat Milan in derbies”.

This was not the case in the league this season. The first Milan derby of the season finished in a 1-1 draw. In February, AC Milan beat Inter 2-1 to claim a crucial advantage in the race for the Scudetto.

Also, despite winning the Coppa Italia with Inter, the Serie A title still eludes Calhanoglu. He has played for the second-placed side in back-to-back seasons now.

In contrast, Zlatan Ibrahimovic can party after fulfilling his promise to Milan fans.

“I won’t retire until I win a title with Milan”

The legendary Swedish striker claimed that he would not hang up his boots until a Scudetto returned to the red side of the San Siro. Two years after his promise, Zlatan delivered.

Aside from his on-pitch contributions, Ibrahimovic mentored a youthful Milan side through the pressures of a title challenge. His guidance helped lift the side up to victory – something that made Ibrahimovic very proud of his team.

“From day one, when I arrived and then others arrived afterwards, very few believed in us,” said Zlatan, quotes BBC Sport. “But when we understood that we needed to make sacrifices, suffer, believe and work – when this happened, we became a group.

“And when you are a group you can achieve the things we’ve achieved. Now, we’re champions of Italy. I’m very proud of you all.”

As well as providing incredible experience, the forward performed dutifully on the pitch. In 23 Serie A appearances, Zlatan scored eight goals and provided three assists. Not bad going for a 40-year-old.

However, the legend’s future is uncertain. Fabrizio Romano gave an update from Zlatan about his plans.

“I will continue playing if I feel good physically,” confirmed Ibrahimovic. “My decision will be made soon. I had many physical problems, but I will decide soon.”