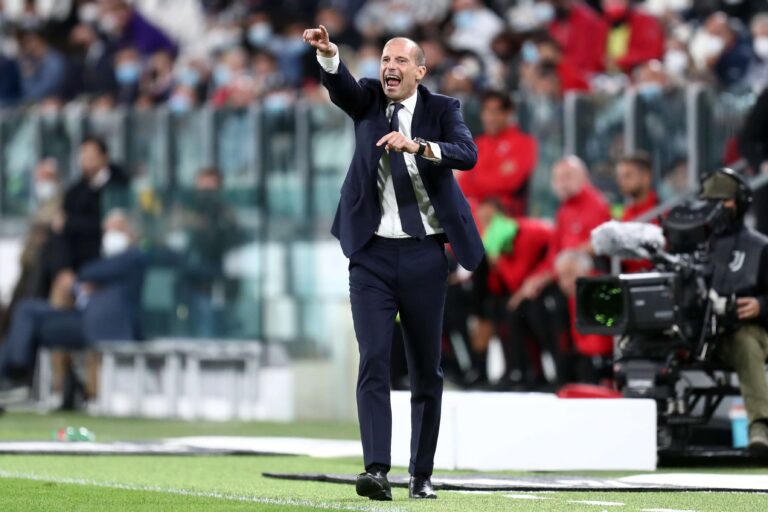 Juventus manager Massimiliano Allegri produced an outraged tirade towards his players as he stormed off the pitch following his side’s 1-1 draw against AC Milan in Serie A.

The draw extends Juve’s winless start to the league season to four games.

Remarkably, they currently sit in the relegation zone, having picked up two draws and two defeats from those opening games.

Alvaro Morata put Juve ahead inside four minutes against Milan – an advantage they would maintain until late on in the second half.

Ante Rebic equalised for Milan on 76 minutes to lift Stefano Pioli’s side up to third in the table. Their opponents are 18th.

Allegri could be heard shouting at his players following the draw in a clip posted to social media.

Translated into Italian, according to Twitter account @juventus_area, he could be heard saying: “Holy s***. And they want to play for Juve”.

The Italian was appointed as Juve manager for a second spell at the beginning of the summer, replacing previous incumbent Andrea Pirlo.

Allegri was previously in charge of the club between 2014 and 2019, with his side winning five Serie A titles and the Coppa Italia on four occasions. They also finished as finishing runners-up in the Champions League twice.

The 54-year-old was inducted into the Italian Football Hall of Fame in 2018.

Allegri told DAZN after the defeat (quotes via Football Italia): “Despite a good first half, when we created chances and allowed Milan just one opportunity, we risked defeat at the end of a game that had been under total control.

“Unfortunately, we lost that concentration, determination and focus. Just look at the corner where we conceded the goal, there was complacency.

“It’s not possible to give this game away after being in control. Evidently, we need to make more progress. A lot more.

“This game doesn’t change anything in my view of Juventus. What we need to learn quicjkly is that there are games where you need to be tough, you have to be determined, to bring home the tackle, keep focused. This is part of the general growth process of some players.”

Juventus are next in Serie A action on Wednesday evening. They take on Spezia at Stadio Alberto Picco.